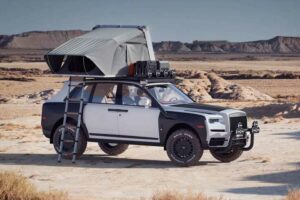 If a Defender's just too common and a Bentayga not tough enough, Delta 4×4 has a solution

That there are no rules to car modifying is what makes it so great; with sufficient money and imagination, you can do pretty much whatever your heart desires. Yet even in a world of Ferrari drift cars and V8 Teslas, this one was a surprise: a Rolls Royce Cullinan expedition vehicle.

Created by Delta 4×4 in Germany, it features every upgrade you might expect of a very serious off-road vehicle. Only on a Rolls-Royce. There’s a snorkel, underbody protection, 20-inch beadlock wheels on 33-inch off-road tyres (with flared arches to accommodate them), an 80mm suspension lift, PIAA super-duper headlights and even a roof tent, with shovels, water canisters and all the other camping paraphernalia. The intention is very much for the Delta 4×4 Cullinan to venture a long, long way off the beaten track. Should be very comfy, at least.

Apparently the team at Delta has been intrigued by the Rolls 4×4 since its launch in 2018; a conversion was planned for a long time, and now with a “call from the Arabian Peninsula” it would seem that the project is actually going ahead. The Cullinan overhaul has been described as “quite a challenge” by Delta, because every modification has to match the quality of the base car – “it must be stylistically and functionally sound and clearly display custom-made perfection”, says the press release. “Anything else would hardly do justice to the original.”

Though Delta only has renderings of the Cullinan project for now, the Rolls-Royce isn’t just pie-in-the-sky fantasy; every part of the package has been homologated and almost all of them are priced for customers wanting to do the same. So although the full package is expected to cost around €150,000 – it was never going to be cheap! – buyers could have just the wheels and tyres (€15k) or the suspension lift (also €15k) or just the rally spotlights, at a mere €2,500. The roof rack is €8,000.

But you’d have to go the whole hog, surely – it would look weird with just one or two changes. The only items without a price yet are the snorkel and new exhaust, the latter better protected than standard and also freer flowing, with a “more beautiful sound” promised. But Delta says they’re tested and homologated – this really is going to happen, folks. Well one of them, at least.

Though it’s hard to imagine too many owners of a £300k Rolls Royce clamouring for an extreme off-road package, uniqueness matters in 2022. People pay hundreds of thousands for paint colours and interior upholsteries from the factory to mark their car out from the rest, and long gone are the days when expensive cars aren’t modified, so why not crank the dial a little further? There’s not going to be another Delta-modified Rolls Cullinan cruising around Sloane Square, which might make the work worth it even before a weekend away in the forest. Used ones start from £299,500…