DeLorean to return with Taycan-rivalling EV 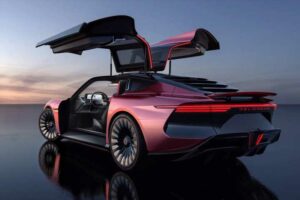 Resurrecting a much-loved brand is fraught with peril. That affection and goodwill for the good old days can become emotional baggage, leaving a manufacturer unable to progress as it makes what it thinks it needs to, rather than the car that will help it succeed. Nostalgia is powerful, but sometimes it’s not always powerful enough to sell loads of cars…

DeLorean is the latest brand back from the dead with this, the new Alpha5 saloon. The brand is now Texas-based, headed up by former Tesla bod Joost de Vries – who himself has acquired the right to DeLorean from Stephen Wynne. The Alpha5 is expected to be shown at Pebble Beach in August, with a provisional on-sale date set for 2024.

So what is it? Well, as is often the way with these things, there’s not much to know for the moment. In a press release for the Alpha5, DeLorean claims the EV will be capable of more than 300 miles on a charge of its 100+kWh battery, with a top speed limited to 155mph. Exactly the kind of specs to align it with the Porsche Taycan, Audi e-tron GT, Mercedes EQE and so on. But as for what actually underpins the car, where batteries and motors are being sourced from, we’re none the wiser just yet.

DeLorean’s Chief Marketing Office is Troy Beetz, who said the new Alpha5 “is a representation of the past 40 years of DeLorean.” He added: “There was this enormous responsibility to make sure we honoured the history of the DeLorean brand, but an even greater responsibility in curating its future…I think we did both with the Alpha5.” The gullwing doors are the most obvious cue to the past, and given the Tesla Model S made production with similar (if presumably smaller) doors, then a new DeLorean with them does seem possible. Same goes for the slatted rear window, just like a DMC-12; cameras could fill in for any shortfall in visibility. We all know looking cool beats practicality, especially when it comes from Italdesign as well – just like the old one.

The red car seen here is the launch edition that will debut at Pebble Beach, the silver preview presumably there as you can’t do anything new with DeLorean without a silver one. And while it’s always easy to say this about early concepts, the Alpha5 does look fantastic from here. Obviously there’s plenty more to find out, and that should come at Pebble Beach; for the moment, the hashtag is #DeLoreanEVolved, and there’s plenty to see on various social media channels. Bring on August!