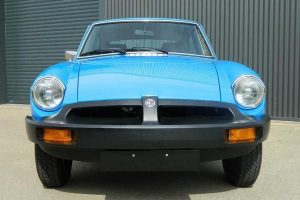 Dry stored for 37 years with numberplates in the boot, this is your chance to own a bit of BL history

It seems staggering that cars like this MGB still exist in 2020. Not the sweet-as-cherry-pie sports car itself, because that most certainly has a dedicated following, rather a 'B as factory fresh as this one. That's not salesman's patter for something recently valeted, either – this MGB has done 114 miles in its entire life.

It's a remarkable feat for a variety of reasons. The first is the age of the MGB, and the somewhat inevitable decline in numbers that comes with passing years; even the youngest rolled out of Abingdon 40 years ago, which is a long time for a car to survive in any condition, leave alone be untouched. Second reason is that the dear old 'B was a car built in Britain during a time when our factories weren't exactly renowned for their build quality. Even something assembled to meticulous standards half a century ago would do be doing well to have made it to 2020, so the MG is perhaps due additional credit. And finally, it's worth bearing in mind how many classics, cars surely more notable than an MGB, have been sacrificed over the past decade to various scrappage schemes. To have survived all that is some achievement.

Of course, it's a lot easier to survive the ravages of time if dry stored, as this MGB has been. But even that is noteworthy; after all, this was hardly unobtainable, collectable exotica back in the day, with more than 100,000 built. The MGB was the accessible, everyman two-seat sports car, so the move to keep it locked away does seem somewhat unconventional. Who would have banked on the MGB being a classic back then?

Whatever the motivation, there's no arguing with the results. Back in 1982 (remember production finished in 1980, so this is a very late car), the MGB was sent to dry storage without even its numberplates or radio fitted. It was only then rolled out again in 2019, 37 years later as some kind of British Leyland time capsule.

It's now for sale at WHBrand in Lincolnshire; the original 106 miles have been ever so slightly added to (the mileage now stands at 114) as fresh tyres, brake and fuel lines have been tested out. Otherwise, it's a box-fresh classic, with original factory chalk markings still visible and the Stratton Motor Company plates in the boot. 'Unrepeatable' is a trite phrase in classic car circles, we all know; however, for all the reasons listed above, this must be a unique MGB.

£24k is the asking price for this piece of British car history, one worthy of a British sports car collection that's for sure. Maybe the humble 'B wouldn't take pride of place, but with so many sold over such a long time, there's a lot of people with a special place in their heart reserved for the little MG. Here's hoping it's just as pristine in another 40 years.