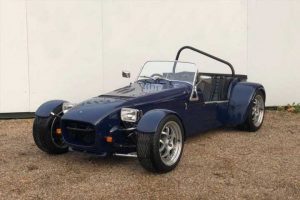 Regular readers will have noticed that the typical Brave Pill is on the extra X size of XL when it comes to engines and kerbweight. Not this one. Last week's 900kg Vauxhall VX220 Turbo might have looked svelte by the column's brutish standards, but this is a four-cylinder lightweight that makes the VX's power-to-weight ratio look almost timid: a Cosworth powered DAX Rush.

Shoulder shrugs at this point are understandable, this being Brave Pill's first foray into the curious world of the UK's once mighty kit car industry. Yet even by the often extreme standards of the genre, the Rush Quadra was something truly mad.

DAX started out producing AC Cobra replica kits, its range diversifying as Britain's interest in DIY performance cars grew through the seventies and eighties. This was the era when the Garagista spirit of our giant-humbling race teams was matched by a growing ecosystem, creating kits for a variety of home-built specials. While other countries tended to treat kit cars with bargepole skepticism, many banning them outright, the UK took a hands-off attitude until well into this century. One that resulted in plenty of shonky Q-plated monstrosities, but also some boundary-pushing specials like this one.

The basic Rush wasn't especially original. It arrived in 1991 as one of a plethora of outwardly similar Caterham-ish lightweights. The -ish being the important bit here – this coming after Westfield had lost a legal case when its cars were adjudged too close to the design of the Lotus Seven that Caterham held the rights to. The Rush's origins were actually with a company called Mohr in Germany, which made a spaceframe chassis which DAX adopted and fitted with a mixture of bespoke parts and donated Ford suspension components.

Rush buyers with different budgets were able to choose between varying amounts of technical sophistication, with either a De Dion rear axle or a more advanced independent set-up. DAX was also agnostic on powerplants, with 'anything that fits' seemingly the corporate motto, and the Rush accommodating everything from a lowly Ford Pinto to a Rover V8. Yet in an act of visionary genius, DAX also offered the innovative possibility of using the powertrain from a Sierra RS Sapphire 4×4, including transfer box and front differential, to create an all-wheel drive version dubbed the Quadra.

There was no shortage of donor powertrains. This was the era when Cosworths were cheap, plentiful – and easily nicked. Together those factors resulted in both a legitimate supply of engines and transmissions from both crashed and stolen-recovered examples, and a less legal stream from those that were TWOC'd and broken for parts.

It had been possible to build impressively rapid Caterfields prior to this point, some of which had already used the Cossie motor. But the Rush Quadra offered a new way to improve traction by the simple expedient of dividing output between four wheels rather than two. It didn't take long for the performance potential of the layout to be recognised.

Rush builders were soon competing to deliver increasingly unlikely levels of acceleration. The high watermark came when a heroic car dealer called Adrian Stanley bet a mate that he could build a road-going car that was faster than a Bugatti Veyron. It took more than £50,000, gallons of sweat and the use of a water-injected 430hp Group A race engine, but he managed it: on slicks his Rush blasted its way from 0-60mph in 2.48 seconds and from 0-100mph in 6.6-seconds.

Our Pill is in a less ludicrous state of tune, but it still won't be anything less than scarily fast. The very serious amount of respect due from anybody even contemplating ownership is acknowledged by the dealership selling it, and the frank admission that "only suitably trained drivers should contemplate purchasing this formidable machine." It's hard not to agree, especially as the advert text actually seems to downplay the potency of the powertrain. The stated 174hp output is surely pessimistic given the least powerful factory spec version of the turbocharged Cosworth YB made 204hp, and the suggestion of front-wheel drive is clearly only telling half the story. On the other hand, the stated 2.8mpg might be alarmingly close to the reality of hard track use.

Our Pill's lack of visible numberplates saw Enzo the hamster unleashed on the database's punched card back end to track down its details. These confirm the car is indeed road legal, but also brings up an MOT history that suggests previous owners have made minimal use of the nominal ability to operate it on the Queen's highway. The Rush wears an H registration plate but was first registered in 2000, suggesting use of a donated powertrain from a 1990 or 1991 Sapphire. The official record also states it had just 669 miles when it took its first recorded MOT in 2006.

A long period of hibernation followed, the car's next brush with officialdom coming with another test in January last year. By that time the mileage had soared to the heady heights of 725, although it failed the MOT on non-functioning rear lights. A clean pass was recorded a week later, with a recorded mileage of 731 suggesting the odometer is indeed working. (Or, if the advert's claim of 7000 miles is correct, that the odo is working but missing a digit.)

Like last December's twin-engined Mini, the Rush qualifies as being brave even without any consideration given to mechanical risk, a putative widowmaker that only the most talented or fearless would consider driving in damp or slippery conditions. It's not hard to see the appeal of taking something so potent to a smooth racetrack to humble supercars on a warm summer's day. But the prospect of piloting it through a thunderstorm, or over autumnal leaf mulch without traction control, ABS or much in the way of impact protection, is considerably less enticing.

While the Cosworth powertrain is both well-known and well supported, rarer components and DAX-only bits will be harder to track down, and may even need to be specially made. (DAX sold the rights to the Rush to M.A.N. Motorsport in Leeds in 2016, but the trail goes cold at that point.)

Our Pill's £25,000 pricetag is also likely to create some heated debate. It's not as if Rush Quadras come along often enough to make setting values an exact science, but that does seem like a chunky price tag compared to some of the more obvious and less scary alternatives. But obvious and unscary isn't what brings us here, and as what is essentially a four-wheeled superbike the Quadra has to be one of the most viscerally thrilling Pills yet. Look at it another way: the supercharged inflation of Ford RS prices means this is probably the cheapest car in the country powered by a low mileage Cosworth YB.