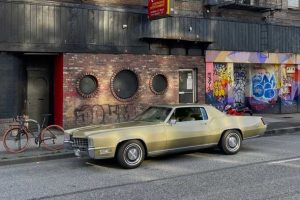 Do you know the song “Right Place Wrong Time” by Dr. John? It may be from 1973, but it’s the tune that comes to mind when I look at Larson Owston’s 1968 Baroque Gold Cadillac Eldorado. It’s hard not to imagine a hand resting on top of the thin-rim steering wheel, looking down the 1,000-yard hood feeling like the city of gold it’s named after. The song also sums up how Owston became the proud owner of this mint daily driver.

It was a case of being in the right place at the wrong time for the car’s previous owner. I reached out to talk to Owston, who has a habit of finding steel plated-gold at bargain-basement prices.

Owston is a career truck driver who’s been a Vancouver, resident for the last 50 years. Before the Eldorado entered his life, he owned a gold convertible 1968 Cadillac DeVille. In 2017, he spotted an ad for a 1968 Eldorado online with an asking price of $3,900 and no photos attached to the listing. The price was tempting and the lack of photos piqued his curiosity. He decided to call the owner and arranged to see the car with his 20-something-year-old son riding shotgun. Expectations were set very low, as one would with a low-price car ad no photos. 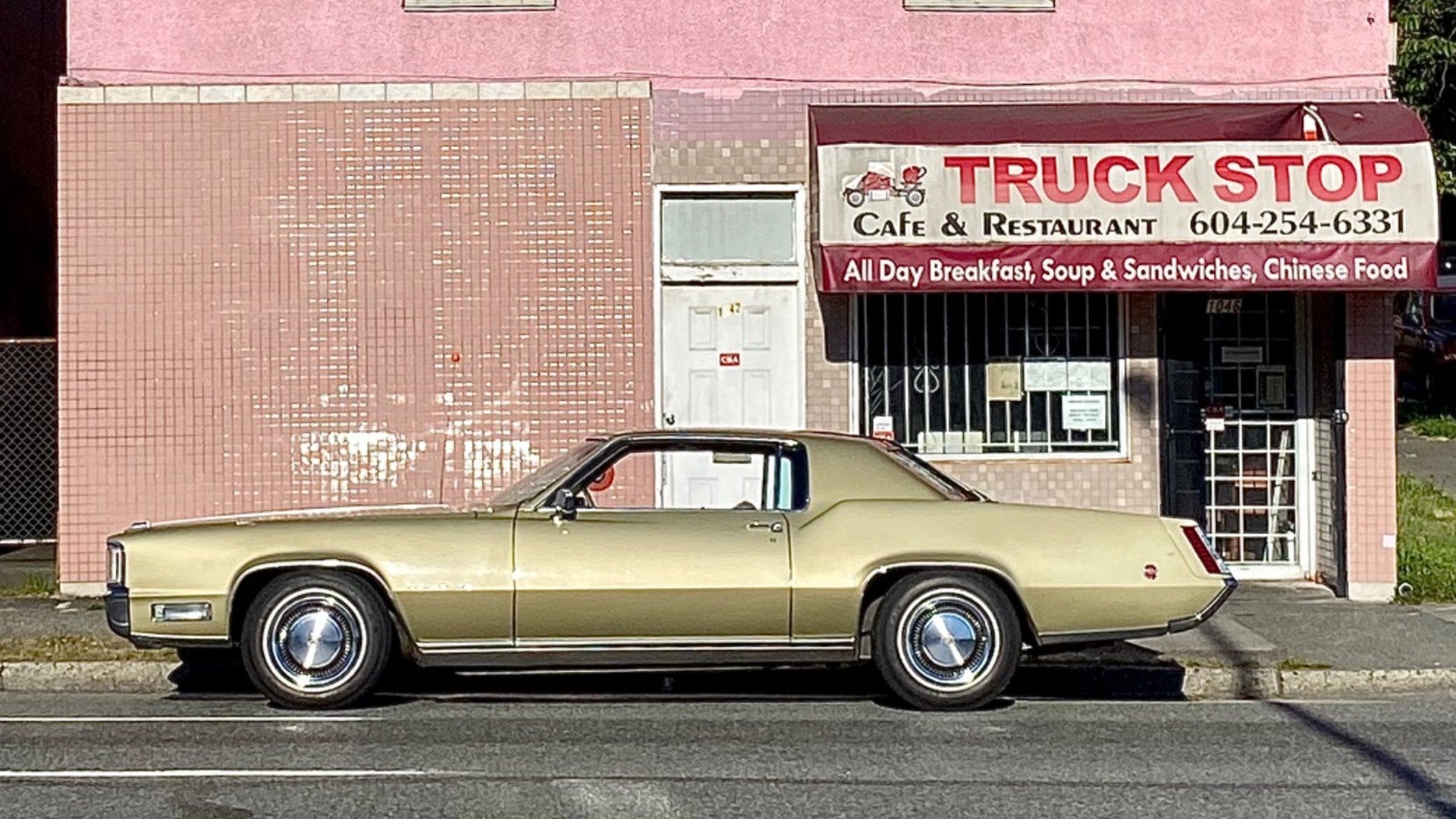 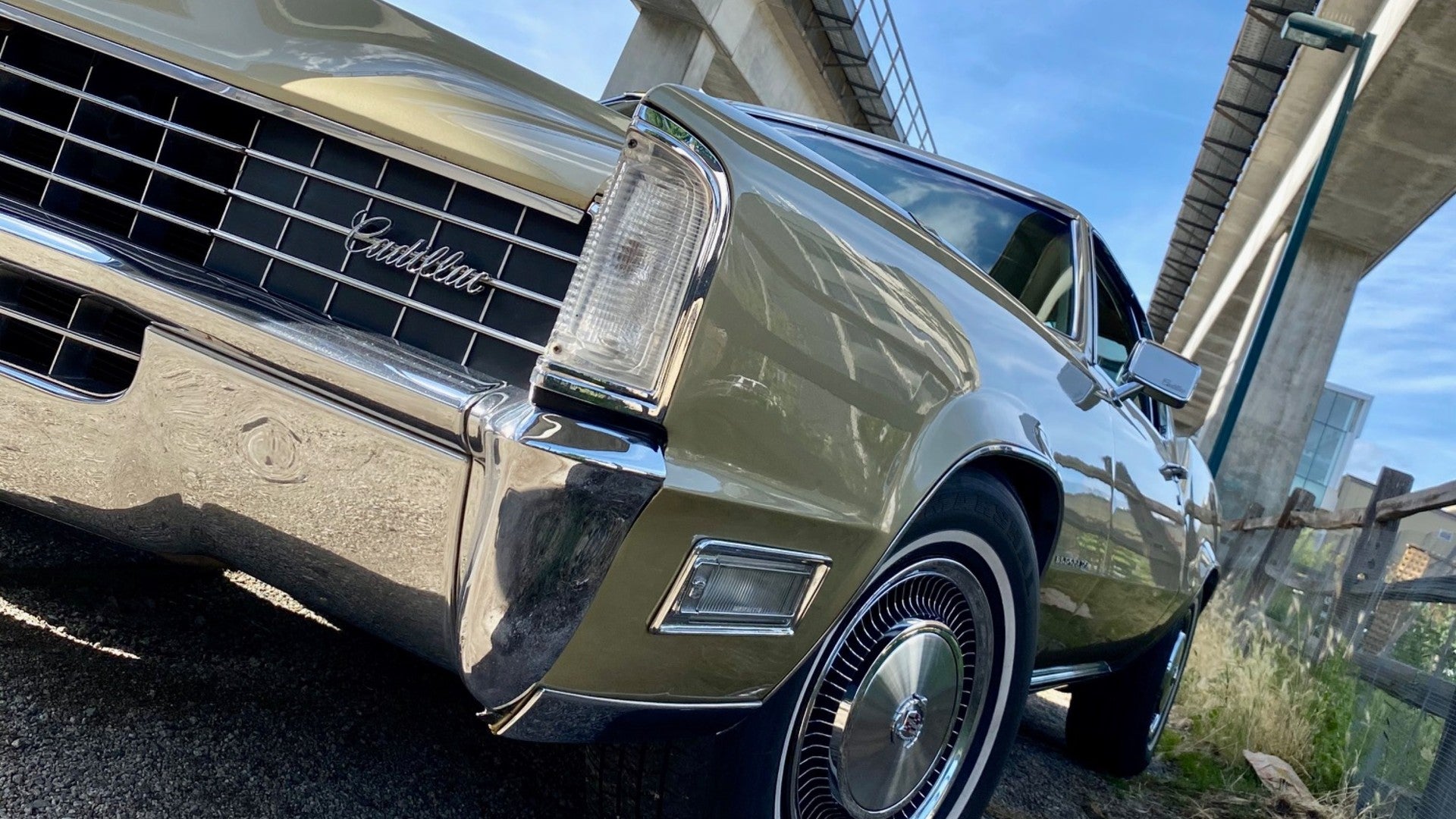 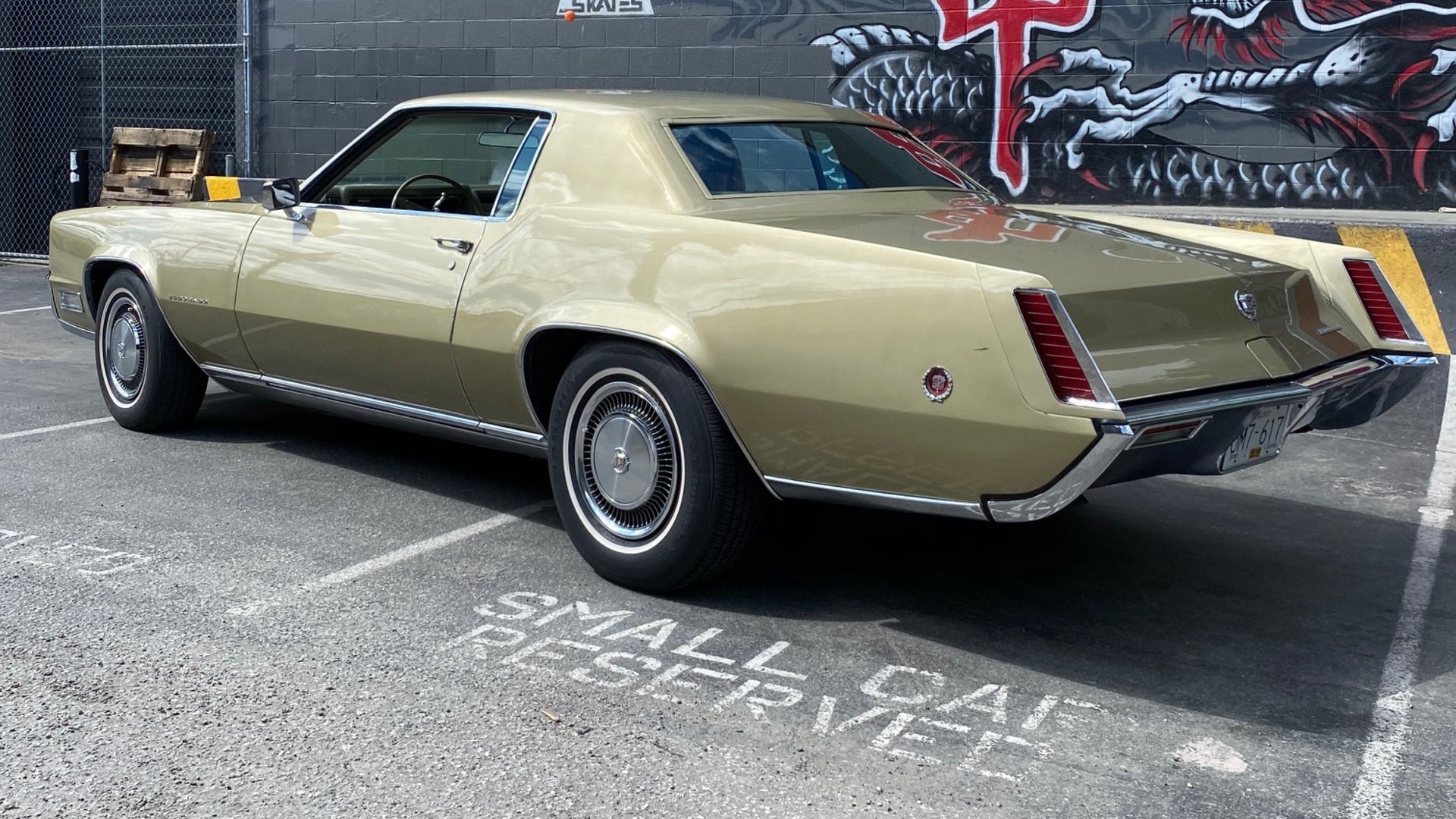 Much to their surprise, when they arrived at the address, they saw an excellent condition 1968 Cadillac Eldorado sitting in the driveway. It wasn’t sitting on blocks wearing 30-year-old patina, moonlighting as a mouse motel. It was discovered that the seller needed the car gone yesterday because it was parked on his ex-wife’s property. The car looked good, but it had been sitting for a few years, so it needed the typical maintenance to be roadworthy. Owston saw a good deal and paid the man. Even though the owner said the car would probably not drive very far, Owston and his son quickly had the beast running and nursed it home.

It was a year before the Eldorado was really able to strut the streets. The entire brake system needed to be rebuilt, and finding original parts was a time-consuming process. However, beyond replacing the brake system, the car only needed a good buff and shine to be in the condition you see it now. Its 7.7-liter 472ci V8 beating heart wasn’t tuned for speed, even with 375 horsepower, but owning an Eldorado in ’68 meant your running days were over—you had arrived. 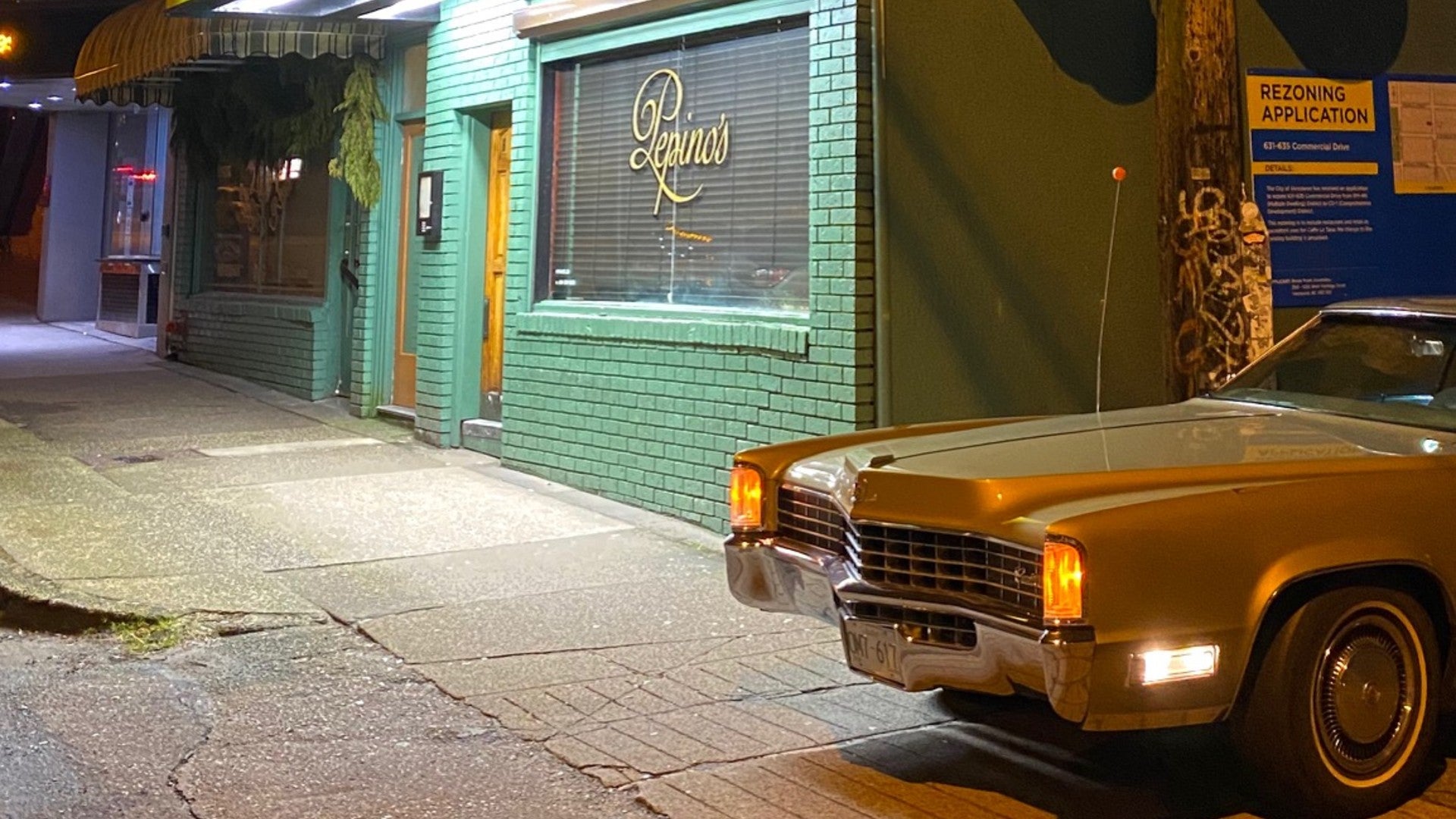 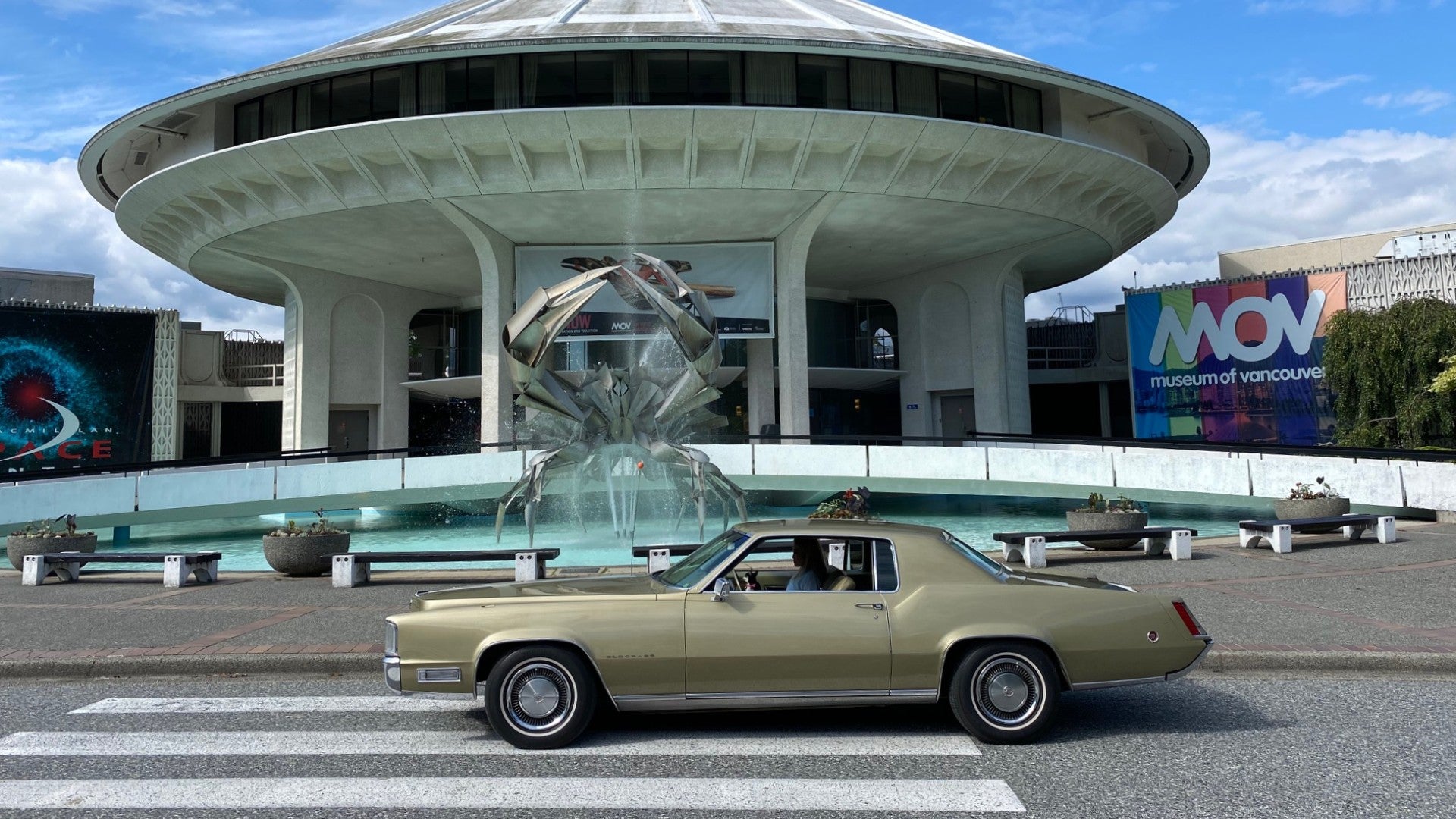 Since 2018, Owston has been driving the Eldorado at least four times a week. Owston loves the car so much that he sold the convertible DeVille and kept this one. I mentioned at the beginning that Owston finds well-kept Eldorados, plural. That wasn’t a typo. In August of this year, Owston purchased a running 1977 Cadillac Eldorado for just $800.

Owston had his eye on this white ’77 Caddy for two years as it sat in an industrial parking lot near his place of employment. In recent months he would occasionally see the car parked with a for sale sign. It started at $4,000, then changed to $3,000, and finally $1,800. At that price, Owston decided it was only fair to take a closer look at least.

The day he bought the car, he rolled up in the ’68 just as the industrial lot owner was closing the gate. The two found common ground talking about Cadillacs, and Owston soon learned why the Eldorado’s price had declined so rapidly. The lot was being sold, and he needed all the cars gone, immediately. The owner looked at Owston and told him, “Gimme $800, and it’s yours”. In the time it took Owston to walk around the Eldorado three times, a deal was struck. 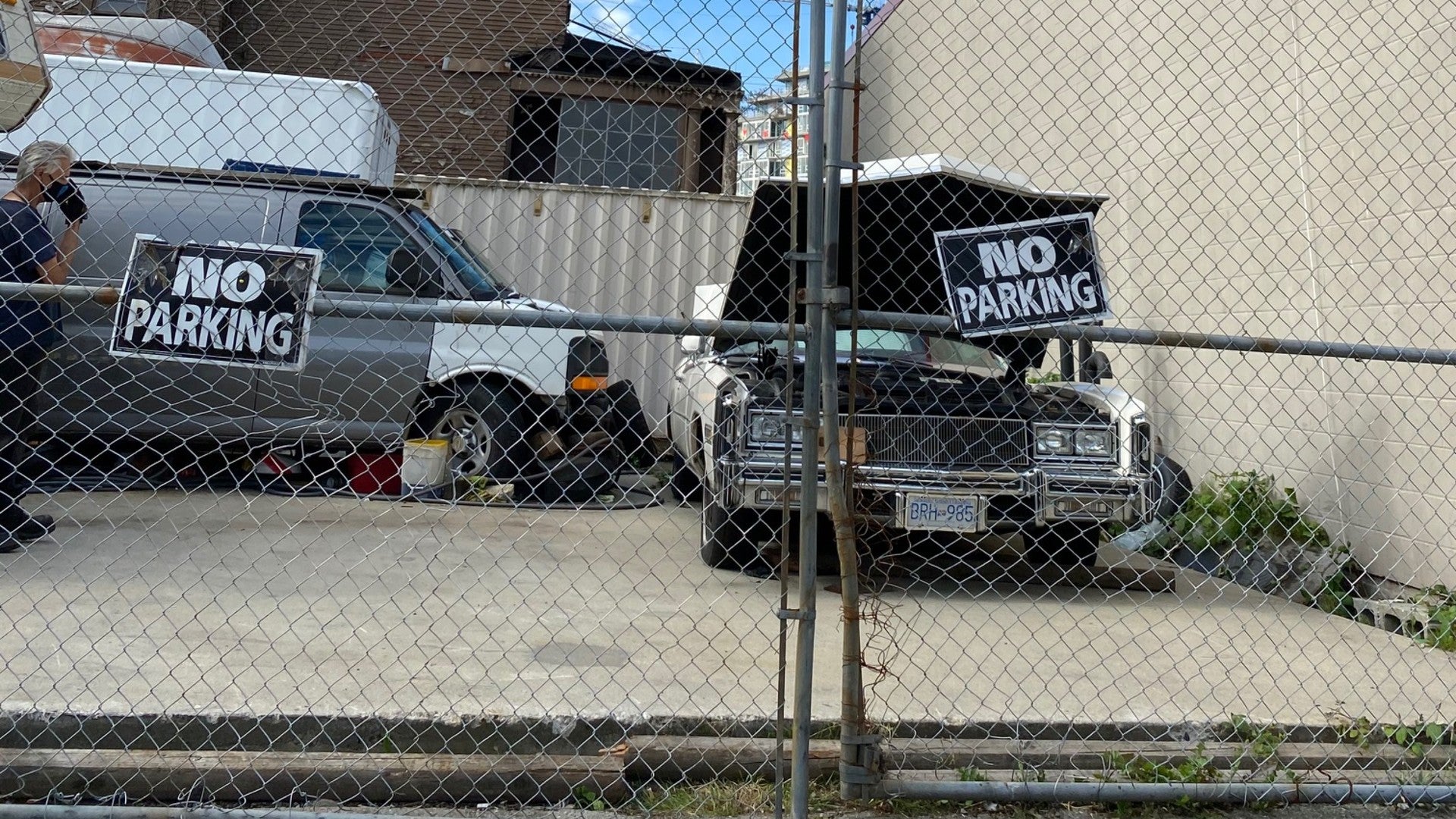 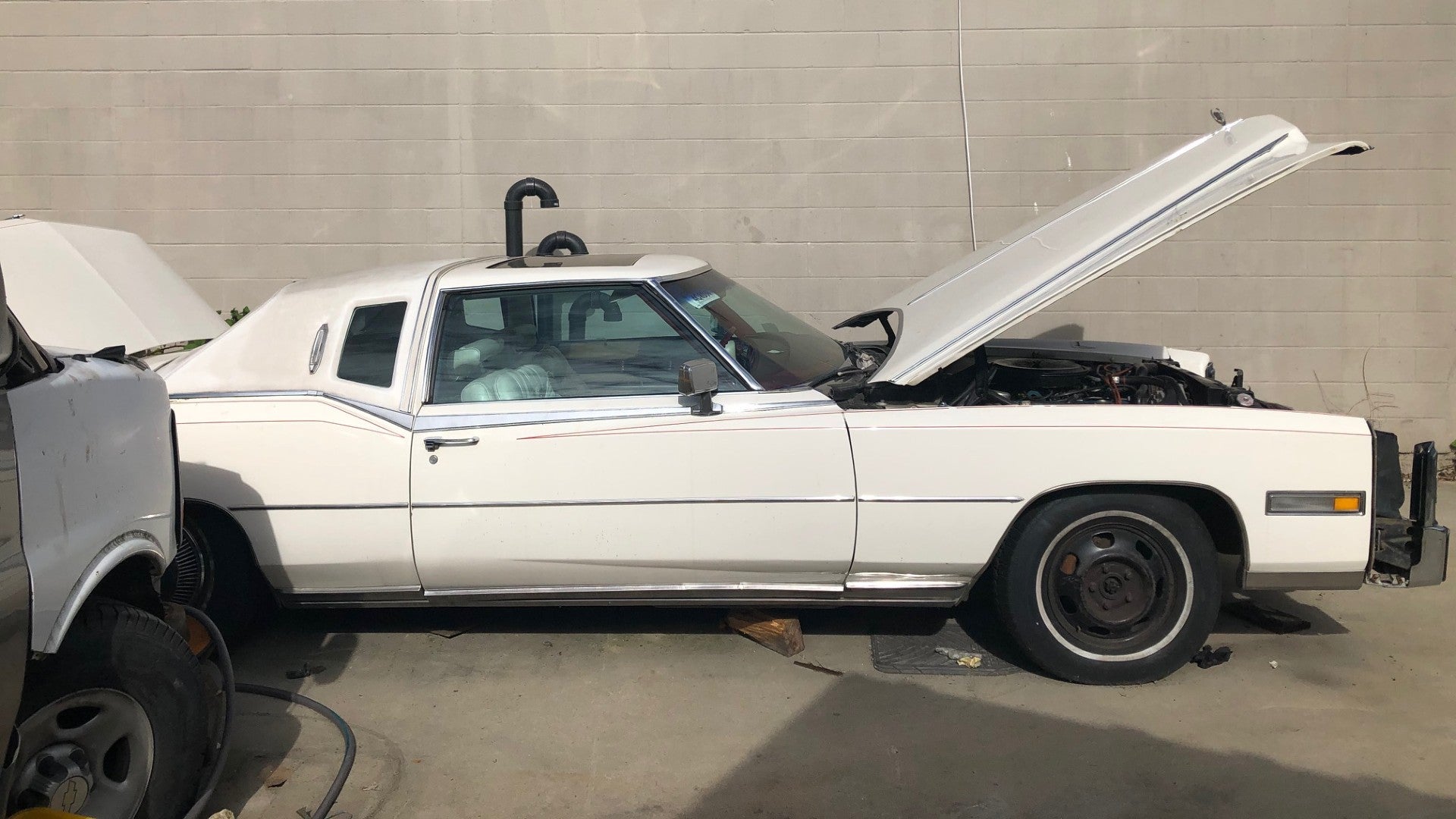 Real estate commands a hefty premium in Vancouver, so Owston had to rent a space at a storage complex in the outskirts of town to park this disco yacht. The car is all-original, runs and drives, but bares a few scraps and burses from living in an industrial side of town.

Owston’s first task was cleaning out the car of all used syringes and trash from drifters who used the car as a lounge at night. But 800 bucks is a helluva deal for 4,950 pounds of steel. The 7.0-liter 425ci engine runs fine, requiring a fluid transplant, new spark plugs, and a fresh battery. Owston plans on using the ’77 as his full-time daily driver. The car is not as pristine, so it won’t give him the same anxiety levels when faced with the modern-day motorist. 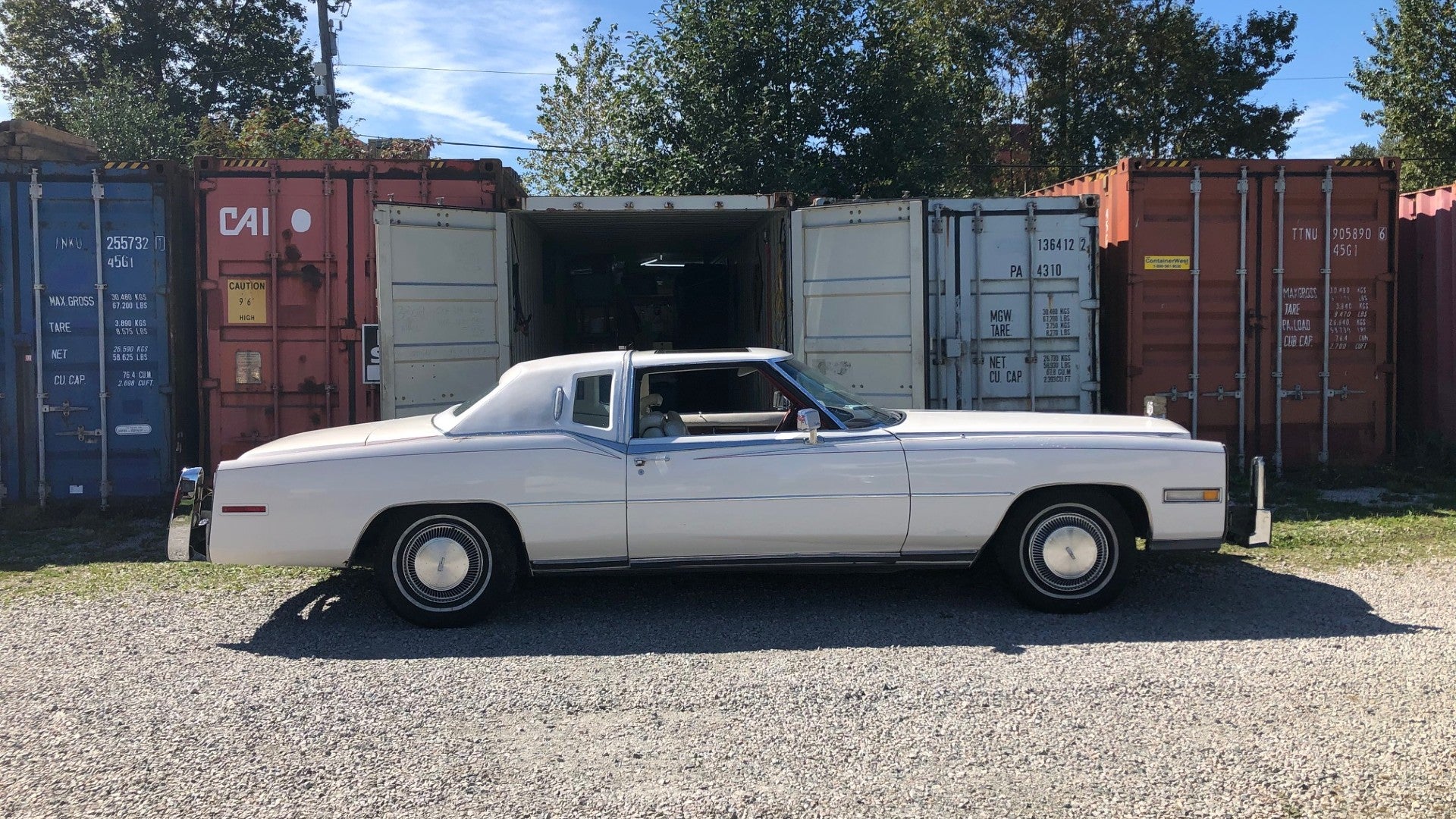 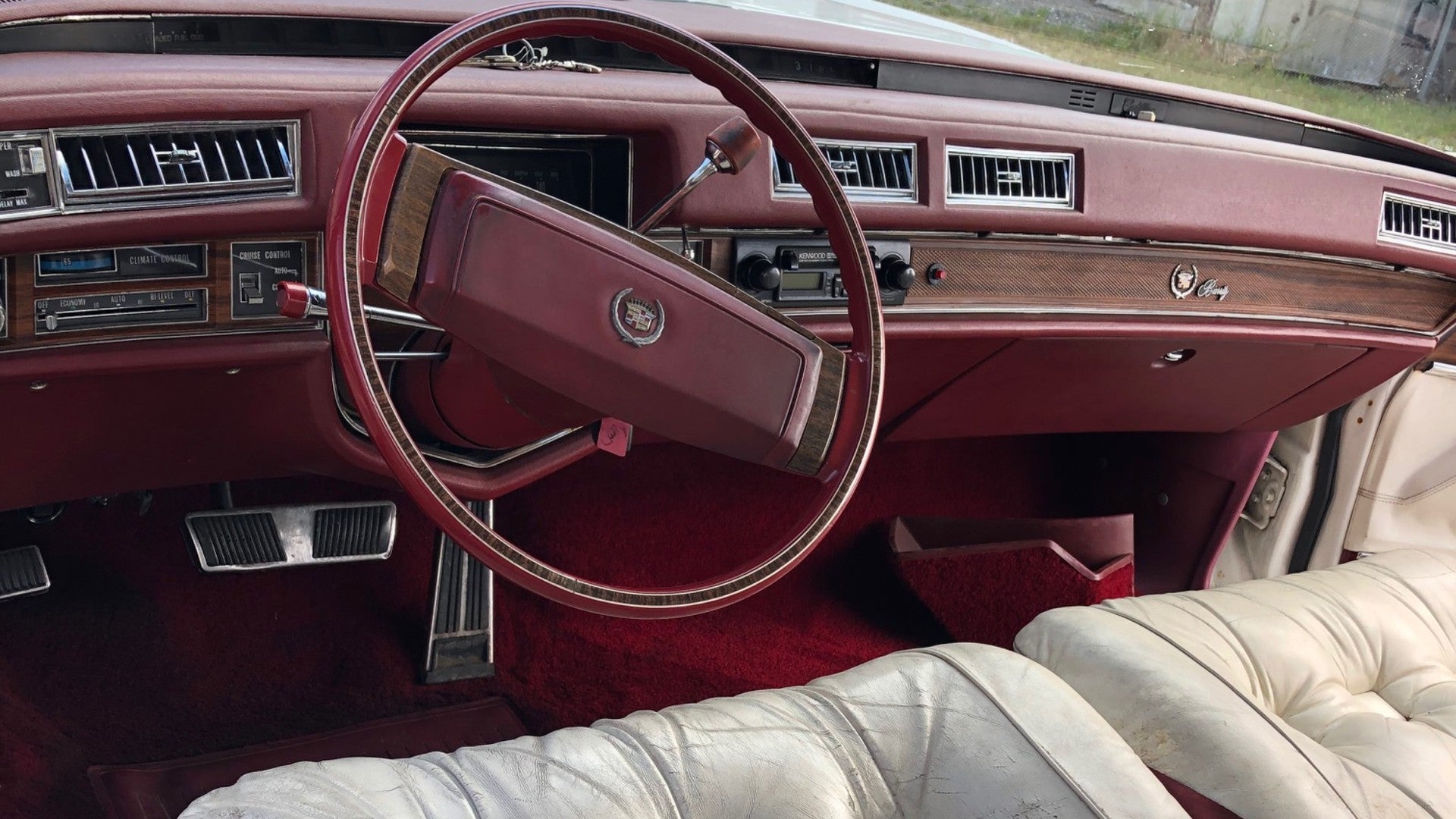 Owston has gained a significant following on Instagram by sharing photos of his full-size beauties. He loves driving them around down spotting other classic cars. People often come up to him to ask if they can take pictures of the vehicle and often talk to him about their grandfather’s Cadillac. These cars are from an era when owning a new Cadillac was a better retirement plan than a 401(K) or cheap gold watch. 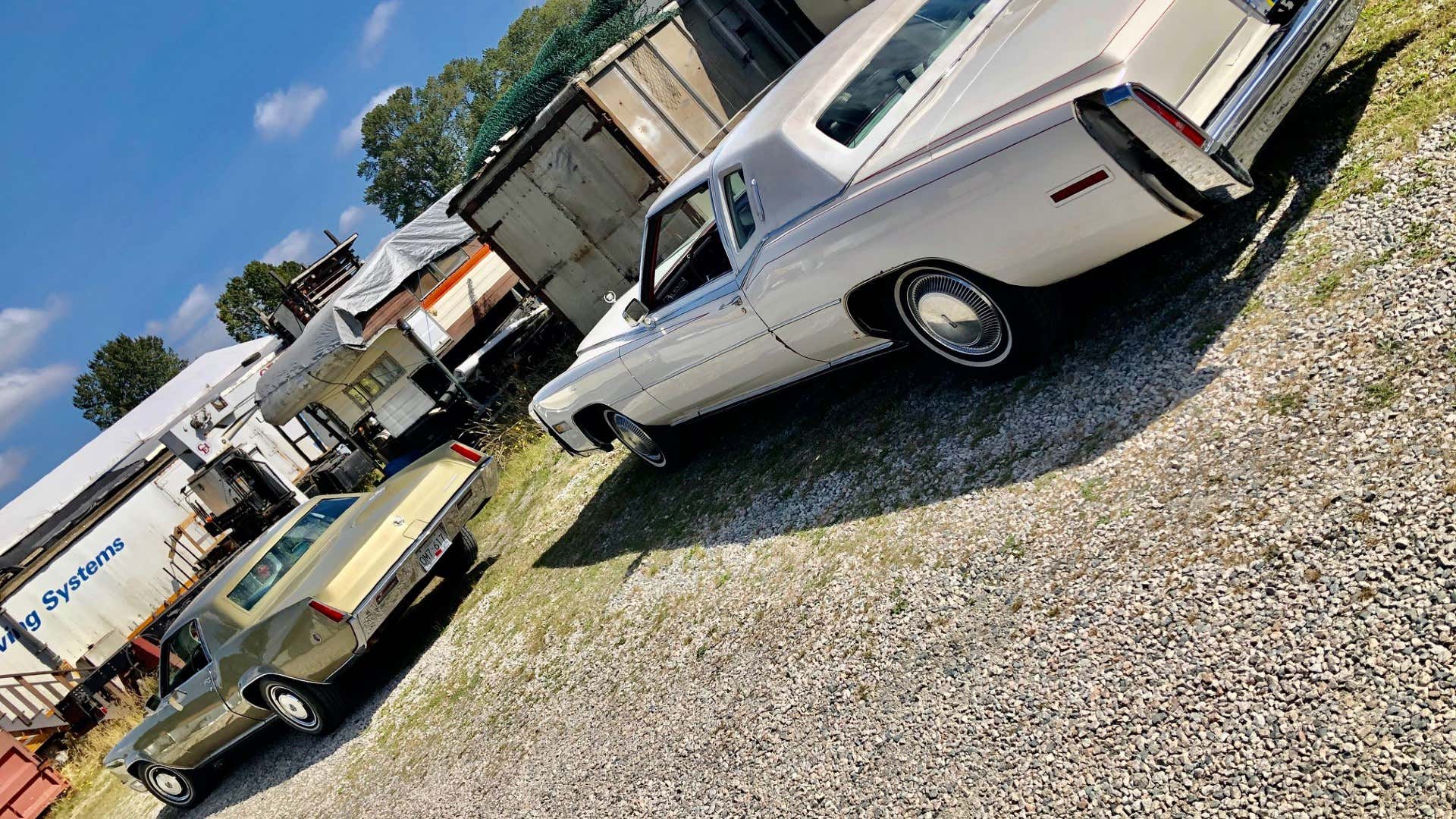 People can work their whole lives searching for their city of gold, forgetting that you can drive a Cadillac Eldorado and feel like you live in one.