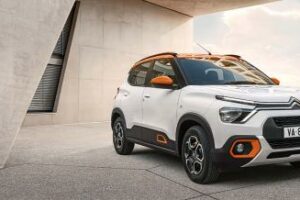 The C3’s modular platform would spawn multiple models including an MPV.

Carlos Tavares, CEO, Stellantis, has shared details of the company’s EV strategy for India. He confirmed that the first all-electric model for India would come from the Citroen stable in 2023.

Citroen’s first EV is expected to be based on the C3 crossover that will be launched in India in June 2022. Tavares has stated that the car is being engineered in India with affordability in mind. He added that India-specific models require at least 90% localization. This would be difficult to achieve for EVs at this point in time, as the company is yet to set up a local supplier base to achieve higher levels of localization for EVs.

The Stellantis boss also confirmed that the C3’s modular platform would spawn multiple models including an MPV. These would be introduced in the Indian market over the next 2 years.

Jeep is also transitioning towards becoming an EV brand. Its global portfolio currently includes plug-in hybrid models, with an all-electric model scheduled for 2023. However, the company has no plans to introduce its electrified range in India for now.