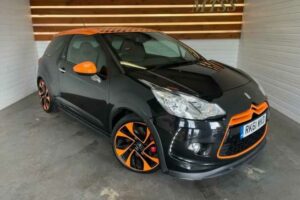 The French car industry is one of two halves. Or, it was anyway. On the one hand, you have all manner of affordable – and sometimes, quite plush – cars that ride with such effortlessness that they might as well have pillows in place of springs and dampers. But when they’re not making mattresses on wheels, they occasionally turn their attention to transforming everyday hatchbacks into some of the most rewarding driver’s cars on the planet.

Until the recent EV boom – which has seen French carmakers fall out of love with rorty hot hatches – both of these markets have been well catered for by the usual suspects. But back in the early 2010s, Renault was the only manufacturer to nail the comfy runabout and track-honed hot hatch with conviction. With an eye on disrupting the market and linking its rally successes with the road, Citroen decided to throw its hat into the hot hatch ring by launching a racy version of its stylish DS3 hatch – and boy, was it a statement.

The launch cars – and likely the ones you’ll (rarely) spot on the road – were finished in black with orange highlights on the wheels, wing mirrors, grille and roof. The skirts, bumpers and wheel arch extensions were made of real carbon fibre (!), and it was finished off with a sticker set that some will call gaudy, but, truthfully, were the icing on the cake on a refreshingly outlandish design. Things were just as in your face on the inside, with an optional orange dashboard, more DS3 Racing stickers and a set of suede bucket seats that dropped the driving position nice and low.

It certainly looked unlike anything on the road and made the Clio RS 200’s Alien Green paint look relatively tame. This wasn’t just a warmed-up version of the DS3, either, with Citroen Racing – the squad behind all but one of Seb Loeb’s nine WRC championships – overseeing most of the work. Under the bonnet is the same 1.6-litre turbocharged four-cylinder engine from an R56 Mini Cooper S, only with power cranked up to a 207hp. That’s all sent exclusively to the front wheels through a six-speed manual box and it’s good for a 0-62mph time of 6.5 seconds – 0.4 seconds faster than the Clio, we might add. The brake discs were stretched by 40mm and paired up with four-piston Brembo callipers, while the upgraded suspension lowered the ride height by 15mm. So far, so regular hot hatch.

What set the DS3 Racing apart from the rest (aside from its colour scheme) was that it tried to retain some of that pillowyness Citroen is known for. The suspension, while lowered, was far more comfortable than what we’d come to expect from a hot hatch, yet it still managed to string a set of bends together without falling over. And though you could argue the electric steering was a little vague at lower speeds, it did make the car a touch easier to live with as a daily runabout. Plus it was capable of averaging 44.1mpg – if not better. In a hot hatch.

Granted, it lacked the raw edge of the Clio RS (not to mention its affordability) and, though a far tamer white-on-grey colour scheme was available, the looks proved divisive. HowManyLeft puts peak DS3 Racing numbers at 151 in the UK, but that’s dropped to just 127 in 2022. They’re a rare sight both on the road and in the PH Classifieds, but rarity has not translated into high prices. This example has 90,000 miles on the clock, is bog standard and is listed at just £5,898. Not bad at all for a lesser spotted hot hatch. Better watch that front bumper, though. Those carbon trim bits won’t be cheap to replace…