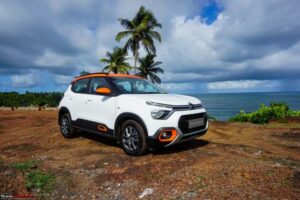 BHPian arjab recently shared this with other enthusiasts.

Yesterday, in Calcutta, I test drove the C3 turbo for a long time, in a mix of maddening urban traffic and some open roads. Being an existing owner of a Nexon Turbo petrol, a Tiago petrol and a first gen G13B Swift I could make a decent subjective assessment of the little Citroen. Needless to say, my views are entirely my own. Thought of sharing them on the forum, in case it helps anyone.

For a 3 cylinder direct injection turbo, the unit is rather smooth. On cold start there is a slight hint of vibration percolating through the steering wheel rim, which smoothens out as soon as the temperature gauge touches its second notch.

I do not know the exact specifications, but to me it felt that for the turbo at least, Citroen must be using a contra-rotating balancer shaft or a dual-mass flywheel to dampen out inherent “unbalanced” nature of any three cylinder unit. I would say this powertrain is up there in terms of refinement with the now forgotten, but brilliant 1.0 litre EcoBoost from Ford which powered their Ecosport.

The indirect injection 1.2 Turbo petrol of Nexon and the same engine in its naturally aspirated version, which powers the Tiago is agricultural in comparison.

The engine is very tractable in the low and mid ranges. Turbo boost starts building up, from what i guessed below 2000rpm, maybe somewhere in the region of 1700-1900 rpm, equating to roughly 24kmph in 3rd gear. The car pulls seamlessly, without any hiccough, velocity building up strongly after 45kmph and you can ride that creamy, torque wave right up to the soft revv limiter, which from the engine note, i guessed it would be somewhere in the region of 5500 – 5800 rpm.

Citroen has calibrated the ECU and the fueling very nicely. There are absolutely no jerks at low to very low engine revolutions. The vehicle gathers momentum effortlessly without any hesitation even when you are lugging the car at low speeds in a high gear.

The gear ratios are well judged and evenly spaced out. The shift action feels very nice and the gearshift lever has a smooth “mechanical” feel with well judged detents ensuring you never experience a “mis-shift”.
3rd gear is very flexible. I dropped to as low as 22kmph in 3rd gear, then floored the accelerator and the little Gaul responded smartly, boost building up from 35kmph onwards in one linear flow.
The Tata 1.2 turbo is simply outwitted in this department. The erstwhile Ford Ecoboost 1-litre also loses out to the Citroen’s powerplant in the low end tractability stakes.

As everyone now knows, the C3’s suspension setup looks most ordinary on paper. From what i could infer, Citroen has waved its magic wand and used its decades of experience in suspension tuning by doing a stellar job in calibrating the damper rebound control valving. When you hit an undulation, the C3 soaks it up like a sponge and then when the wheel is “released” it is done in a very nice and compliant way so that there are no unpleasant thuds and thunks with the lower control arms hitting the bump stops on full “release”. From a subjective point, the suspension travel felt greater compared to other competing models. The Citroen has progressive rate coil springs. Add a long travel suspension, tall 65-aspect ratio tyres, finely tuned seat cushioning and nicely calibrated dampers and you have a level of ride comfort which is truly impressive for a car in its segment.

The steering is nicely calibrated. It has a smooth, self centering action and is commendably weighted. It is not bristling with feel, like say a Tata altroz’s steering but the helm has very little slack in the “on-centre” position. What is advantageous is the compact steering wheel diameter and the relatively less number of turns, lock – to – lock, which gives the car an added dimension of agility.

I belong to the Jurassic era of motorists when driving meant straight-forward simple mechanicals residing in a well tuned chassis chained to a manual gearbox – the setup which you can exploit the whole day and have a lot of fun. I always believed that: forget top speed; make an ordinary hatch handle 20% better and you will reach your destination 20% faster. and Citroen has done that I feel.

This car is not for the “Gen Z” digital brigade. It does not have half the things in terms of features, that its Japanese or Korean equivalent has. It will not appeal to a considerable percentage of the car buying populace. But to that minority of us that still love driving and pine for a nice, mechanical connect with the car, the Citroen hits the spot.

The seats are excellent. Supportive all around with variable density cushioning it should ensure comfortable motoring for many hours. The combination switches feel good to operate and most buttons, knobs and levers do their job with a rustic yet positive feel.

Yes, I have booked one. Delivery time, as on date, is being quoted at 3 months.

It appears that the PSA EB series, which won the International Engine Of The Year award in 2015, turbo engines supplies to India are limited. This is because Citroen is importing the Turbo engines from their plant in France and have been allocated a fixed number of turbo engines to import per year into India. The naturally aspirated one’s are made by PSA/Stellantis India in Tamil Nadu and supply is not an issue.

Anyways, i am not in a hurry. I am pleased with the fact that in today’s world, overrun by digital gizmo’s and controlled by clinically accurate “connected systems”, someone has made a nice, affordable, comfortable, analogue motor car which is very nice to drive indeed!

And that is exactly what I prefer.

Check out BHPian comments for more insights and information