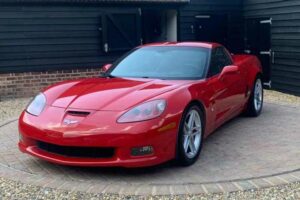 There’s some understandable excitement around the new Corvette Z06, which will be revealed to the world on October 26th. Not only is it the first mid-engined Z06, but it’s also getting a flat-plane crank V8 never seen in a Corvette; add that to the favourable impression already made by the standard C8 and the promise of tangible motorsport influence and it’s easy to get why anticipation is at fever pitch. Especially if it comes to the UK…

Let’s not forget, however, that the Corvette Z06 has come to Europe before. Yes, it was in left hand drive and, yes, it was in tiny numbers, but a few of the C6-era Z06s were allocated to Europe. This one has been here since new 15 years ago.

Even by the standards of souped-up Corvettes, the C6 Z06 was something special. It used the larger Chevy small block ever made, the 7,011cc LS7 V8, which made 512hp and 470lb ft. It was dry-sumped to ensure it sat low in the body (and was better suited to track driving), and also featured titanium alloy con-rods to help it spin all the way to 7,000rpm. Yet the Z06 was the lightest Corvette of its generation, too, at just 1,400kg, thanks largely to using aluminium in place of steel for the chassis. Combined with firmer suspension, bigger brakes, and wider tyres, the Z06 was a real weapon of a Corvette.

Crucially, however, it wasn’t as wild as the supercharged ZR1 that eventually followed; for those who wanted to drive on roads other than drag strips, the supposedly inferior Z06 was more rewarding. Same for the most recent C7 Corvette, too, where the ZR1 was really more engine than the car could handle. The American sports cars are not where you would expect ‘less is more’ to apply, but that’s been the case for the past two Corvettes.

For those who can accept sitting on the left of the car, this Z06 seems to offer a heck of a lot. Because besides all that it offered as a new package (and which only looks more attractive a decade and a half later) is the fact that is looks a very nicely presented used car. The paint and wheels are unblemished, the interior looks decent, and the MOT history is flawless – it’s passed every single one first time all the way back to 2008, never picking up more than a few thousand miles a year. There’s been one advisory in 20,000 miles and 13 years of testing, which was for worn tyres in 2017. This is a Corvette, after all…

And while on PH we love to get behind the British brands, hopefully the appeal of a 7.0-litre, manual Corvette this good for the price of a hot hatch shouldn’t be too hard to explain. If the new Z06 does come to the UK in right-hand-drive, it promises to be an awe-inspiring supercar. But this one promises to be a pretty memorable experience in itself – and for an awful lot less money.