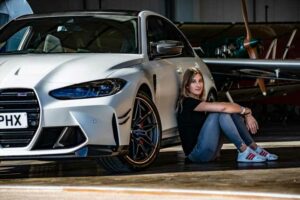 It's International Women's Day! We chat to one of motorsport's pioneering female racers…

We’re always proud when our little PH family does well in the world. And our former blogger – and, back then, Euro Hillclimbing star – Charlie Martin is doing very well indeed.

Her racing CV already covers the British Hill Climb Championship, European Hill Climb Championship, Ginetta GT5 Challenge, Michelin Le Mans Cup, VLN Championship, Britcar Endurance – and she was the first transgender racer to compete in the 24 Hours of Nurburgring (she finished an impressive fourth in her class). Now she’s one-upping that achievement, with her sights set on being the first transgender competitor at the 24 Hours of Le Mans. Oh – and she’s been featured in Vogue magazine on the Vogue 25 list of “the most influential women working in Britain.” That’s the closest anyone from PH has ever been to becoming America’s Next Top Model.

So Charlie more than ticked our boxes for a PH Meets, both as a true ambassador for International Women’s Day, and also just because she’s a super cool and talented racer.

CM: Of course not! It was when I used to race in the French Hillclimb Championships – I bought a Formula Renault and built a van, like a Luton van, into a motorhome-cum-race truck. I was a racing nomad going all around France competing in amazing places. It was a crazy experience. I was chatting with [PistonHeads’ old friend] Dan Trent and he wanted me to start a blog about the adventure. It was quite fun.

PH: We’ll start with an easy one – what’s your favourite childhood car memory?

CM: Back when I was really young, my dad had a Ferrari 308, which was super cool – black with cream leather. He’d always wanted that – it was his pride and joy that he saved up and bought. Back then, with no internet or anything, you just didn’t see Ferraris and Lamborghinis and things like that like you do these days. That was a big deal for me. It looked incredible – I remember going for drives with him, and I suppose on one level, that was probably a big part of the beginning of my fascination with cars. Seeing that car up close, the smell of it, the interior and everything. It was just so different to anything else you saw on the road. It was almost like a spaceship to me when I was six years old.

PH: What a car for the school run. What about your first car?

CM: Well, my first car only lasted about four weeks before I crashed it… But after that, I got a Renault Clio Mk1 1.4 RT – I absolutely loved it to bits. It was a metallic blue, purpley colour, slammed on 16in Team Dynamic wheels, with Pioneer stickers on the boot. What I really wanted was a Clio Williams – but the insurance would have been about £8,000…

CM: Well, it literally was – I had a dream about a Clio Williams 3 last year, I woke up at five in the morning, figured out how to manage the financing for it, then found one on Google… Then while I was driving down to London that day, I went to the dealer, and bought it there and then. It’s the sort of thing where you go “you should never buy the first car you see”… but I did! And it’s great! It takes you back to being 17 years old, it’s a great feeling. It’s not crazy fast, but you can hoon around it, it feels engaging. That’s my pride and joy at the minute. It’s my daily driver.

PH: There’s nothing like having an idea and rolling with it. Speaking of which, it’s your goal to be the first transgender racer in 24 Hours of Le Mans. How’s your preparations for that going?

CM: It feels like a bit of a quest, it’s something that goes on and on. It was 2018 when I announced that – but we’ve had two years of a global pandemic that has put people’s plans a little further back… Joking aside, last year was my most successful year that I’ve ever had in racing. Third place for the Praga R1 in the Britcar class, and two other cars I raced I put both of those on the podium. So in terms of progressing in my career, everything’s going really well. I’m absolutely 110% focused on achieving my Le Mans goal.

PH: You’ve certainly got lots of fans and supporters behind you.

CM: The momentum I have, both the exposure of my ambitions and my story, is really great. Right now is a time in motorsport where people are looking for different kinds of stories and narratives from people. We’re at a time where diversity and inclusion is something that’s really being celebrated in all walks and forms of life, and I think in motorsport, it’s something that is trying to be embraced. Motorsport is a very traditional sport – it’s only in the last year or so that it’s really started to look inwardly and think we need to modernise. There’s a good appetite out there for different stories and different lived experiences. This is a great time to do something that make LGBTQ+ history and hopefully achieve a lot of positive impacts, and a lot of awareness and positive change in the world. That’s a big part of my motivation to achieve it as well.

PH: And quite right, too – what an achievement that will be. So apart from the obvious things like “get F1 teams to pick a female driver”, what more can be done in motorsport to help with diversity and representation?

CM: Bucsh Light has just launched an initiative in NASCAR, called #AccelerateHer, a ladder scholarship scheme putting tens of millions of dollars into accelerating the careers of women either coming into NASCAR, or already competing. That’s what’s exciting – looking at women who are already competing in the discipline and wanting to develop them in all aspects, physical training, management, media opportunities, sponsorship. Giving women the tools they need to do what they want to do.

PH: And what about from the fans?

CM: I think one of the best things people can do is just to try and educate themselves. Try to understand those different lived experiences, what it’s like for someone coming from a minority background, whether you’re talking about someone from the BAME community, the LGBTQ+ community, racers with a physical disability or neurodiversity. Understanding different lived experiences is a really key thing because it helps us build empathy, and that empathy is really what starts to drive lasting social change. When you have that human connection, that’s what actually makes people act differently. Whether you’re talking about standing up for someone when they’re not there, whether you’re talking about having a meeting and suddenly realising that you’ve left out a whole group of people from this discussion, whatever form that takes. Educating yourselves and then sharing what you’ve learned with other people. Don’t be afraid to engage with people even when you don’t feel like you have the right terminology or social skills, or life experiences to share with. Try and stand up and make a difference, especially for people when they’re not around.

PH: What a perfect message for International Women’s Day. Thanks so much for sharing your experience. Oh, and final thing – what’s the next car on your driving list?

CM: Well, BMW is launching the M3 Touring this year – and that is a cool car. I’m genuinely really excited about that, I really like estate cars. They’re perfect for me, because I like surfing, mountain biking, all that stuff – I love a big wagon that’s super fast. So that’s my current, real-world dream car. As much as I love the Clio, a 26-year-old French hot hatch isn’t that practical. That said, I did manage to get a ridiculous amount of stuff in it on the way down to Brighton last week…