Home » Auto News » Caraboat: The British Combination of a Caravan and a Boat From the 1960s

Caraboat: The British Combination of a Caravan and a Boat From the 1960s 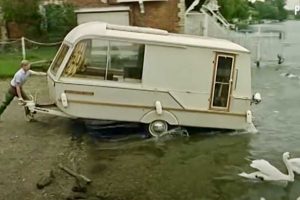 A caravan is what the Brits call campers—as in the rolling little houses we tow with a pickup truck or SUV. If you’ve ever watched Top Gear, you’ll know they’re a part of the culture across the pond, a cheap way to go on a vacation to a slightly less dreary part of England without spending a bunch of money. There are plenty of different types of caravans, but needless to say, the floating variety is not a common one.

Back in 1968, a caravan-building firm in Lancashire thought it would be a good idea to take a stab at building such a machine—although it had been attempted a few years earlier in 1955. That example, however, looked a lot more like an actual caravan as opposed to a plywood barge. It also did away with the racket from a small two-stroke engine in favor of a more powerful four-stroke outboard.

Looking pretty good for a sea-faring caravan, the “Caraboat” could be hauled to any boat launch with something like a Triumph 2000—as it was in this video—and then, assuming you remembered your waders, you simply detached the caravan from your car, and pushed it into the water. Look at those swans right next to it in the promo video, and the ducks. Do you think they’re impressed by the Caraboat? Some species of fish grew legs millions of years ago and now they’re making the Caraboat. I don’t know, If I was a duck I wouldn’t be impressed. Stick to what you know, right?

Once you’re out on a local lazy river—they’re all pretty lazy—you can do whatever you want. In this video, the husband and wife duo sit on opposite ends of the caravan sipping tea in silence, which is a pretty British thing to do. How about they try fishing or something? The narrator mentions you could also get drunk on the Caraboat, which he says would be fun. Nice.

Believe it or not, there’s actually an Australian company that makes something called the Caraboat today. It’s pretty much exactly like the one in the video, but somehow a little less appealing.

Maybe we’ll talk CaraBoat into letting us test one and we’ll tell you how it is. I have my kettle ready to make some tea!