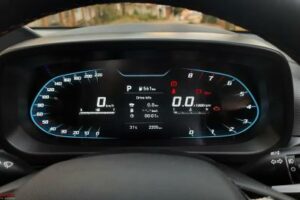 My Hyundai i20 N-Line had consumed a good 6L of more petrol than what it indicated.

BHPian ChiragM recently shared this with other enthusiasts.

From what I understand, the fuel gauge in cars tends to hold on to the full mark even after a bit of fuel is consumed. It has been designed in such a way that it initially depletes slower to give the driver a false sense of better efficiency. Because of this, the gauge depletes slower in the first half and faster in the second. This means that when the gauge tells you that you have 50% of fuel left, you have much less than that.

I did not realize this and it took me off-guard during an inter-city trip recently. Starting this thread since I could not find one on the same topic.

Now here’s what has left me scratching my head – I drive the new i20 N-Line and would like to know if Hyundai has gone a little overboard with the tuning of the fuel gauge. I have not noticed this perceived effect in other cars I have driven, more so in my Maruti Ritz. Did cars back then not have this?

I did a quick check with my i20 recently. The car has a 38L fuel tank, which means that when the gauge showed that it had depleted by 25%, the car should have consumed approx 9.5L of fuel. But when I filled it up, it gulped in a good 15-16L of fuel. That’s a good 6L of fuel more than what it indicated (I filled up as soon as a quarter reduced on the gauge).

Here’s what BHPian Chetan_Rao had to say on the matter:

The gauges are approximations, and NOT graded linearly or accurate down to the last litre or fractions of it. The top quarter of the gauge lasts a lot longer than the bottom quarter on every single car I’ve driven, for example.

The approximations are especially true for modern electronic displays with digital block readouts instead of sweeping needles, where each block represents a certain approximated amount of fuel and the block stays lit whether you’re near the top or bottom of that block w.r.t. usage. More than once, I’ve noticed parking the car overnight and the fuel gauge showing one less bar the next morning.

The gauge also has no way to accurately represent ‘top-ups’ beyond the full tank a lot of people indulge in. The gauge doesn’t move for a bit after refuelling, but you’re still burning fuel just the same.

The only way you’ll get a hang of what your car does is to observe and correlate over time.

P.S: On our roads where you can be cruising one moment and crawling the next, the DTE indicator isn’t worth the energy it takes to display. I’d turn that and instantaneous FE off on my car if I could

Here’s what BHPian iamahunter had to say on the matter:

Yes, it’s with all cars.

Have experienced it in my Swift and Ecosport first-hand. It’s more like a 60:40 ratio. (60% fuel in the first half of the indicator and 40% in the later half)

Also, do not totally depend on the range shown on the Mid, not just Hyundai, but any car. It always keeps changing with the driving conditions.

After driving the car for a while, you will get an estimate of how much the car would go in the full tank. Reset the Trip meters for ease.

Here’s what BHPian Dr.AD had to say on the matter:

This is not an anomaly. This is the inherent nature of how fuel gauges work. This is certainly not something that is “designed to give any false sense of better efficiency”. This is the limitation of the physical design of fuel gauges.

Again, this is common in most (all?) cars. All fuel gauges are nonlinear. The magnitude of this nonlinearity depends on several factors, including the shape of the fuel tank. In some cars, this effect will be more pronounced and may catch the driver by surprise, in some cars it will be less obvious. But this is how all fuel gauges work.

Basically, the sender unit of the fuel gauge has an old fashioned float, which floats on the top of the fuel surface and sends signals about fuel levels. Depending on the fuel tank shape and volume, the fuel level does not change linearly with the fuel volume. In other words, instead of directly measuring fuel volume, this float can only measure the liquid surface level, and that gives rise to this non-linear behaviour.

Here is one article that explains it.

In summary, this is not an anomaly, but rather a well known and basic limitation of the fuel gauge sensors. This is certainly not something that is designed to give any false sense to driver. This is common in all cars, and over time, one would get used to this. For most experienced drivers, this is a known fact and their brain already accounts for this when they interpret the fuel gauge readings and judge the amount of fuel left in the tank.