Car bursts into flames on Jalan Genting Highland – advisable to keep a fire extinguisher in your vehicle – paultan.org 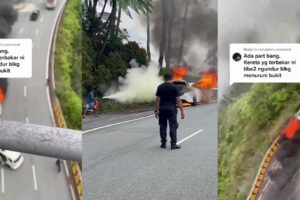 On Monday (May 9, 2022) a car burst into flames and rolled backwards at KM 2.9 along Jalan Genting Highland, with the harrowing incident captured on video by TikTok user ren.pmx. According to The Star, the car was carrying a family of five at the time, all of which managed to escape safely.

In the video, the burning car was seen rolling several metres down the road as pedestrians and other vehicles scrambled to get out its way before the car eventually hit an MPV. Another video posted by user kas_man88 showed an individual attempting to put out the blaze with a fire extinguisher shortly after.

According to a Pahang Fire and Rescue Department (JBPM) spokesman, the department received an emergency call at 1.44pm and rushed to the scene. “An operation to put out the fire was carried out but 80% of the vehicle had been razed. A couple and their three small children escaped unhurt,” he said, adding that the cause of the fire is currently being investigated.

Bentong OCPD Superintendent Zaiham Mohd Kahar said the family was heading to Genting Highlands from Kuala Lumpur when a fire broke out from the car’s engine compartment and spread to other parts of the vehicle. “The driver quickly stopped the car on the road and the family scrambled out to safety,” said Zaiham. “The driver of the Toyota Vellfire was unhurt,” he added.

This incident is another reminder that vehicle fires can happen and it’s advisable to keep a fire extinguisher in your vehicle in case of such an emergency. A small fire extinguisher (1 or 2 kg) is adequate and relatively affordable at around RM50. You should look for one that uses dry powder with a rating of BC or ABC to deal with Class B (petrol, grease and other highly inflammable/combustible liquids) and Class C (flammable gases) fires – Class A is for wood, paper, fabrics etc.