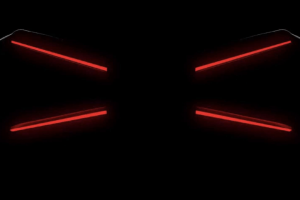 Bugatti has finally given us a date for the reveal of its X-taillighted latest creation. The vehicle appears to be a track-focused hypercar and so far, all the brand is willing to say about it is quite cryptic.

In a social media post, Bugatti pondered “what if…” and posted only the number “0,67” written in chalk. Not a lot to go on.

As Carscoops points out, unless Bugatti’s next car is being launched off an aircraft carrier, a 0-60 time of 0.67 seconds (which would amount to rather painful, but survivable 4.2G, if achieved) sounds pretty unlikely.

They also pointed out that a coefficient of drag of 0.67 would be odd to boast about since the Chiron’s Cd is 0.36. Mind you, measuring drag isn’t all that simple on race cars, since wings and spoilers tend to add substantially to drag. That means that while a Jetta has a Cd of 0.24, an F1 car’s Cd tends to vary between 0.7 and 1.1, depending on the track. All of which is to say that a Cd of 0.67 isn’t absurd, it’s just odd to boast about.

Bugatti has been talking a lot about weight lately. Earlier this month the brand wrote: “the connection to aeronautics and to particularly light and uncompromising racing cars has existed at Bugatti for over 110 years. And the story is by no means over yet.”

This led us to wonder if 0.67 might be a reference to the power to weight ratio. Or, for this theory to work, that would be weight to power ratio. What if (callback) Bugatti was talking about kilograms to hp? If we take the metric hp of 1,500 and multiply it by 0.67 to get the kilograms per PS ratio, we get 1,005 kg. Ferrari was talking not too long ago about getting its cars under the thousand kg mark. For Bugatti in particular, though, that would be quite difficult because the 8.0-liter W16 engine alone weighs 490 kg. That doesn’t leave very much weight for the rest of the car—which appears to be fairly extreme.

Did you watch today's video? There I talk about the Nürburgring laptimes. I mentioned the upcoming @bugatti hypercar allegedly being able to lap the Ring in sub 6… sub 5:30 maybe even according to the simulations. And look at that: first spots of the prototype! #bugatti #usofast #EBsub6 #nurburgring

Did you watch today’s video? There I talk about the Nürburgring laptimes. I mentioned the upcoming @bugatti hypercar allegedly being able to lap the Ring in sub 6… sub 5:30 maybe even according to the simulations. And look at that: first spots of the prototype! #bugatti #usofast #EBsub6 #nurburgring

Micha Charoudin, of Nurburgring fame, meanwhile posted these pictures of the car to Instagram and posits that it can lap the Nurburgring in less than five minutes and 30 seconds. This, he says, was based on calculations—calculations which said the Porsche 919 could do the lap in 4:30, so they’re highly idealized—so could something closer to the six minute mark be the key? Maybe a 6:00.67 lap time? That would certainly be an achievement worth boasting about.

Whatever this turns out to be, we’re excited to find out next week.