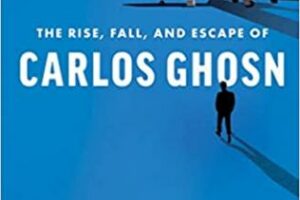 Nick Kostov and Sean McLain piece together Ghosn’s life and actions across the globe.

Carlos Ghosn is known to be one of the world’s most feared and admired business executives. He made headlines following allegations of financial misconduct, which led to his arrest in 2018. The subsequent events would fit the plot of a Hollywood blockbuster.

Wall Street Journal reporters Nick Kostov and Sean McLain have now released a book titled “Boundless: The Rise, Fall, and Escape of Carlos Ghosn”. It tells the story of the former Renault-Nissan CEO’s alleged crimes and his daring international escape.

In 2021, a documentary titled ‘Carlos Ghosn: The Last Flight’ was also released as part of Storyville on BBC Four. It too sheds light on the complex case of financial misconduct and Ghosn’s escape from Japan.