British firm reanimates the MG B as an EV 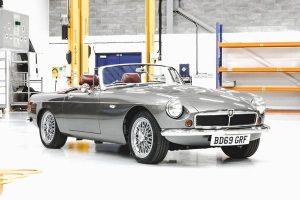 A British company that specialises in the remaking of classis cars with electric powertrains has revealed a pre-production prototype of its next product. The classically styled but electrically powered MG B has a lithium-ion battery pack under the bonnet and drive motor on the rear axle, delivering what creator RBW EV Classic Cars claims is genuine sports car handling and performance.

While the body and styling are true to the original, the underneath is all cutting edge, with hardware supplied by Continental Engineering Services (CES) and that brand’s offshoot, Zytek Automotive. Around the drive stuff the so called EV B gets all independent coil-over suspension and modern brakes, which work with a renegerative system to top-up the battery. RBW has also used what it describes as “the latest generation of hub design and wheel bearing technology” to enable “maintenance free usage”. It’s all brand new.

Better still, the base chassis and drive system created here is said to be compatible with other bodies, including the Austin Healey, Jaguar E-Type and Mini, which is exciting for anyone hoping to conform to ULEZ motoring in something from the previous century. The build appears to be finished to a very high standard, and it will need to be with a starting price of £90,000 excluding taxes. Of course you're getting much more than a rebodied EV; with  a digital instrument cluster, WiFi enabled sat nav and phone connectivity, it’s inevitably more like a modern car dressed in vintage clothes.

If it all sounds like your sort of jam, there is hope of more attainable models in the future, although the first run will be limited to 30 cars. RBW said it’s planning further models, including a fixed head GT version that’ll follow in 2021 along with a second RBW electric recreation. So there’s plenty in the pipeline, which is good news for an innovative engineering company based in the Midlands.