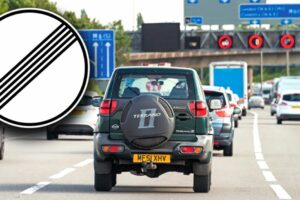 Politicians have been meddling with Britain’s motorways for decades, and questionably-delivered projects such as smart motorways have proved that those in power aren’t always the most clued up when it comes to making decisions that are best for drivers.

Another drastic change to Britain’s motorways could be on the cards, as Tory leadership contest forerunner and Liz Truss has told Conservative members that she would consider introducing a German-style autobahn system with completely derestricted speed limits across the UK if she were made prime minister.

Asked by a Conservative party member at the final leadership debate before voting if she’d consider binning the mandatory 70mph speed limit and letting drivers decide how fast they want to go, Truss said: “On speed limits, we need to be prepared to look at that…I can’t give you a precise answer.”

The prospect of an autobahn-like setup here in Britain may excite some motorists, but the idea is completely far-fetched, especially considering that the quality of the roads here is often less than brilliant. Truss’ comments ought to be taken with a bucket load of salt, although they’re sure to prompt fierce debate.

A more feasible plan outlined by the potential PM has been a promise to scrap smart motorways, stating that the “experiment hasn’t worked” just a few years after they were considered the future of Britain’s road network. Plans to roll out smart motorways across the UK were paused in January this year after studies proved that they were considerably more dangerous than traditional motorways.

The UK has almost 500 miles of smart motorways, which often have no hard shoulder for drivers to use in an emergency or a ‘flexible’ hard shoulder which can be opened as a regular driving lane when traffic builds up.

“I absolutely think that we need to review them and stop them if they are not working as soon as possible…and all the evidence I have suggests they’re not working,” Truss said. “We need to be prepared to look at that. I do believe that the smart motorways experiment hasn’t worked.”