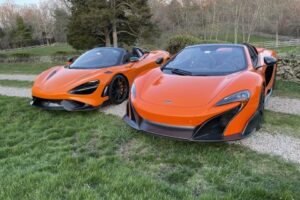 As a long term 720S owner, the controls were all very familiar and intuitive. I find the layout easy to navigate and the controls are all within easy reach.

BHPian SSO recently shared this with other enthusiasts.

Almost 5 years to the day that I put my order in for what was to become the 765LT Spider, ours arrived on the driveway. In April 2017 we attended a 720S launch event. Mrs. SSO was very impressed with the 720S from the moment it was unveiled and quite enthusiastically shared her point of view with the McLaren Sales Manager. A series of short discussions followed and by the end of the evening we had placed an order for both a 720S Coupe and the LT Spider. The latter based purely on the brilliance of the 675LT Spider. The 720S Couple arrived in October 2017, was replaced by a 720S Spider in November 2019, which in turn was traded in for the 765LT Spider. It took three cars over five years but now a 765LT Spider rests majestically in our garage and it certainly does not disappoint.

Despite being sure I wanted a 765 LT Spider when the new model 7XX model line was introduced, I did have a few doubts going into 2021, when a final decision would need to be made and the official spec/order placed. In early reviews, a few journalists/influencers seemed to believe the 765LT Coupe was completely “feral” and would try to kill you at the first opportunity. Having owned a Koenigsegg CCR, this wasn’t a foreign concept. However, given that a 650S Spider is my daily driver, I tend to get a lot more seat time in supercars than most auto journalists/influencers and therefore tend to be much more used to their characteristics. The other main questions were if the 765LT was a worthy successor to my favorite McLaren, the 675LT and how different it was from the hugely competent 720S? Fortunately, McLaren North America lent me a 765LT Coupe for 4 days in July 2021 and all these doubts and questions were more than satisfactory resolved.

When it came to spec’ing the 765LT Spider, having had the loaner 765LT Coupe was quite helpful. There were three seat options, base 720 buckets, “P1” type seats, and “Senna” seats. The 765LT Coupe was fitted with the “P1” seats, which we both found quite comfortable, and so the decision was made. The front nose lift, 360 parking assist, and the electrochromic roof were other must have options. We had decided long ago to match our 675LT Spider’s interior and exterior colors. While the black leather interior was quite easy to match, the 675LT Spider’s Tarocco orange exterior was more of a challenge as that shade of orange was no longer in the McLaren color palette. The team at McLaren Special Operations was kind enough to send us a number of orange paint samples which we then compared to the 675LT Spider. Ventura orange was closest and that’s what we decided to go with for the 765LT Spider. From 20 feet away, they look identical, its only up close and in the sun that you can see a difference. Based on past practice, the best way I know to bond with a new car is to immediately embark on a road trip. This practice dates back to our time in Europe when I purchased a number of cars in different countries, flew in to take delivery, and then drove across the continent (posted on karenable.com – Driving a F40 Across Europe). You find out within a few days whether you have made a great buying decision, or the car is going to be another “6 months and its gone” situation. As it was also our anniversary weekend, convincing Mrs. SSO that we should do a weekend road trip to a new Relais & Chateaux hotel that had a restaurant well deserving of a couple of Michelin stars was not a hard sell.

While the 765LT Spider was disgorged from the transporter and dropped on our driveway on Friday, it wasn’t until Saturday morning that we headed out. After dropping down into the very comfortable P1 bucket seat, a firm push of the starter button brought the 765LT Spider bursting into life. As a long term 720S owner, the controls were all very familiar and intuitive. I find the layout easy to navigate and the controls are all within easy reach. After getting the side mirrors set, the roof down, and the nose lift up, it was time to swing around to the front of the house and pick up Mrs. SSO and our luggage. Two leather duffel bags and a large carry-on bag disappeared easily into the frunk (front trunk).

With the car now fully loaded, a tug of the right hand paddle, a bit of right ankle flex, and we were off. Our destination was the Chatham Inn and our 80 mile route would be a combination of highways and back country roads. As the 765LT Spider does have a break in period unsuited to long range cruising, this would be a good combination of roads and distance to get a large chunk of that out of the way. The first section was all back country, so after giving the 765LT Spider a chance to warm up, it was time to flex my right ankle and get the 765LT Spider to come alive. 50 mph seems to be the turning point. Below that the 765LT Spider feels like it is just trundling boredly along, over that it starts to come alive. As it was fairly early, the roads were clear so we could push on a bit. Like the 675LT Spider, the more you push the 765LT Spider, the more it shrinks around you. It just sticks to the road and the front end tracks exactly to where you point it. Like every McLaren we have owned, the steering is near perfect in terms of both weight and feedback. In fact, I believe it’s a major positive point of difference vs. all of McLaren’s competitors. On roads like these you almost don’t need the brakes if you time your gear shifts properly to set up the corners. You can then use the throttle to drive out of one corner and launch towards the next. Body roll is simply non existent. The 765LT Spider piles on speed like a tazered animal so getting the touch right on the accelerator pedal is critical. The gearbox feels as quick as the Senna’s and each pull of the paddle comes with what sounds like a high powered rifle shot coming out the back when you are on it. Being able to put the roof down just adds to the drama and levels of engagement. While turbo lag is minimal, you still get that feeling of surging forward at an increasing alarming rate as the tachometer swings quickly from left to right. The 765LT Spider feels like it is made for quick windy back country roads as it just vacuums up the tarmac.

After half an hour of bliss, we hit the highway. In many ways the highway was a bigger test of the 765LT Spider’s overall usability than the back country roads. Given its track development focus, I knew the 765LT Spider would be very much at home on the twisty stuff. How livable it would be on a highway for an extended period was a bit of an open question that was quickly answered. Even with the roof down it is still easy to have a conversation with your passenger at “Montana type speeds”. The key is to put the glass rear window up as it deflects the air flow over the cockpit. Even with the roof down and the temperatures in the 50’s F, with the heater on and airflow directed into the footwells, we were quite comfortable. The P1 style seats are even better than I remember, and while snug, are nicely supportive. Mrs. SSO also approved of the P1 seats, and we concurred that we preferred them to the standard 720S seats. In what’s a very 1st world problem, the downside to the P1 seats is they are not electric, so you need to slide them back when entering or exiting the car. Even on the post winter chewed up highway, the 765LT Spider absorbed the multiple imperfections and rode very comfortably. While I hadn’t had much need to test the brakes in the earlier part of the drive, I did have one opportunity to see just how good they were when a case of youth, stupidity, and an over estimation of talent happened in front of me. I had to mash the brakes quite hard on this occasion, the rear wing flipped immediate up, and we scrubbed off quite a bit of speed in what felt like 10 yards. During this the rear end never so much as twitched and the whole car felt completely planted.

After 45 minutes we dropped off the highway for a short cross country cruise to the Chatham Inn. From the outside, the Chatham Inn looks very much like many warm well kept New England country Inns. The Relais & Chateaux flag outside is the only giveaway that this place operates on a whole different level. The staff are all warm, welcoming, and highly efficient. The room was beautiful decorated with a number of very considerate and thoughtful touches. The shower required an advanced degree in waterflow engineering to operate but once mastered, was delightful. While breakfast was excellent, it was dinner in the Chatham Inn’s Cuvee restaurant that was truly outstanding. At Cuvee you have a choice of either a 4 course menu, with 4-6 selections within each course, or a 7 course Chef’s Tasting menu. The food and service were on par with many Michelin 1 & 2 star restaurants that we have had the good fortune to dine in.

The drive home on Sunday was both highly enjoyable and uneventful. It served to reinforce all the attributes uncovered on the drive out. We took the even longer route back as the sun was out and a drive along the coast is always good for the soul. Once home, we unloaded the frunk, and I dropped Mrs. SSO off. Between the front door and the garage, I somehow got lost and went on another 20 minute drive down to the beach. After finally putting 765LT Spider to rest in its new garage space, I walked away convinced that this is a car that will be with us for a long time.

With the 765LT Spider, McLaren has developed a car that’s even more focused than 675LT Spider and at the same time retains much of the polish of the 720S Spider. It’s a Senna that you can spend hours in an emerge from fresh and with your hearing intact. In fact, you could probably use a 765LT Spider as a daily driver. Being clear on our 765LT Spider’s use case and choosing the right seats is definitely key to a good ownership experience. The 765 is definitely worthy of the “LT” designation. If the 675LT Spider is regarded as the best car McLaren Automotive has built to date, McLaren might just have matched that with the 765LT Spider.