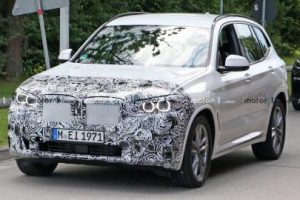 The BMW X3 is due for an update and new spy images suggest that SUV could receive a minor facelift in the near future.

BMW could make a few changes to the X3’s front fascia. It is likely to get a redesigned twin-kidney grille and new bumpers. Besides, the rear fascia could get subtle updates as well. The test car seen in these images appears to have the same headlights and tail lamp clusters as the current model. It is equipped with 5-spoke alloy wheels and has twin exhausts.

Meanwhile, a test mule of the X3 M was spotted in Mumbai earlier this year. The high performance version of the X3 is rumoured to be launched in H2-2020.

The X3 M is powered by a 3.0-litre, 6-cylinder, twin-turbo petrol engine that produces 473 BHP and 600 Nm. The engine is mated to an 8-speed automatic gearbox and an all-wheel drive system.