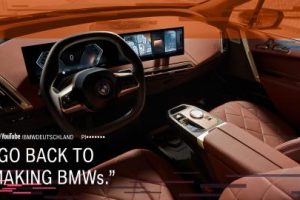 BMW really wants us to like their new designs. Case in point is the latest commercial for the new iX electric SUV.

BMW has come under a lot of criticism for its polarizing designs in recent times. It all started with the 7 Series and X7, when BMW first introduced the oversize grille. Fans weren’t too happy when they saw the new M3 and M4 either.

Now, even the all-electric iX gets a disproportionate grille and fans are not holding back to voice their opinions on social media. In response, BMW has released a media campaign in a bid to silence its critics.

The video titled “What’s your reason not to change?”, features actual quotes from social media. Rebutting each and every one of them, the narrator asks if we have started to feel uncomfortable with the unknown or have we just stopped being open for anything new.