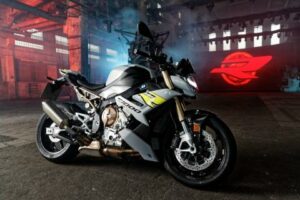 The 2021 BMW S 1000 R will be imported via the CBU route and comes in three variants – Standard, Pro and Pro M Sport.

BMW Motorrad has launched the second-generation S 1000 R in India. The bike will be imported as a completely built unit (CBU) and comes in three variants – Standard, Pro and Pro M Sport. Prices start at Rs. 17.90 lakh (ex-showroom).

The new S 1000 R is a naked roadster derived from the S 1000 RR. It features a new LED headlamp and redesigned fuel tank side panels, tank center cover, side panels and engine spoiler. BMW claims that the reversible handlebar clamp and height adjustable seat have improved ergonomics.

The bike is equipped with four riding modes – Rain, Road, Dynamic and Dynamic Pro. It can accelerate from 0-100 km/h in 3.2 seconds and has an electronically limited top speed of 250 km/h.

The new S 1000 R is based on a ‘Flex Frame’ with the engine being a load-bearing element. This makes the new model significantly lighter than its predecessor. The bike also gets a new suspension geometry that is said to have improved agility and feedback.

For the first time, BMW is offering the S 1000 R with engine drag torque control (MSR) as an option. This system prevents the rear wheel from slipping due to abrupt throttle application or while downshifting. The bike also gets features such as Engine Brake, traction control, Wheelie control, Dynamic Brake Control, ABS and ABS Pro.