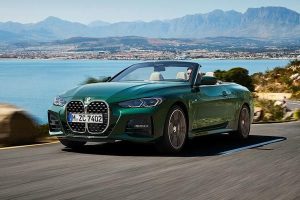 Just when you thought it was safe to return to your computer, eh? It's quite possible that the coronavirus pandemic has had a knock-on effect when it comes to BMW's launch schedule, forcing the manufacturer to unveil the new 4 Series Convertible less than a week after the M4 was introduced to the world. Or perhaps it has simply decided to crack on as quickly as possible, to avoid Grillegate becoming a long-running talking point.

Either way, the 4 Series has an additional variant, and you're not going to mistake it for any other generation ever. No, not just because of the "prominent, upright BMW kidney grille" (although mainly that) but because its maker has seen fit to deliver a newly developed 'panel bow' soft-top where previously there was a retractable hardtop.

Naturally BMW says it marries the solidity and all-weather capabilities of its predecessor with the 'classical appeal' of a fabric hood. The truth is though that it's considerable lighter (by as much as 40 per cent) and almost certainly cheaper to produce – but it's to the 4 Series benefit regardless: the old hardtop's failure to properly replicate the car's sweeping roofline always made it seem like the unfortunate loser in a lookie-likie contest.

The new hood – black as standard, Anthracite Silver as an option – makes for a similar profile when raised, yet functions now as a proper point of differentiation to the coupe. Beneath it BMW promises a low centre of gravity (presumably handily lower than any of its predecessors) and perfectly balanced 50:50 weight distribution despite the addition of reinforced side skirts and other convertible-specific bracing. The tracks are wider, too, by 28mm on the front and 18mm at the rear.

Mechanically speaking the most notable element is probably confirmation that the M440i badge (followed by the M440d next year) will migrate to the convertible, delivering a 374hp/369lb ft, all-wheel-drive variant right out of the gate. The model is said to deliver 62mph in 4.9 seconds (5.1 seconds in the oil burner) and 38.2mpg thanks in part to its 48V mild hybrid tech. A 184hp 420i and 258hp 430i – familiar turbocharged four-pots both – fill out the range alongside the inevitable 190hp 420d; all are mated to the eight-speed Steptronic transmission.

Regardless of engine choice the convertible will be offered in the UK in M Sport trim, meaning you get the firmer suspension, sportier seats and 18-inch wheels. The Pro edition adds 19-inch M light-alloy wheels and the adaptive chassis; the M Sport differential is standard on the M440i. The range-topper will set you back at least £59,645, but prices start from £45,785. If you're convinced despite the styling controversy – or perhaps because of it – expect delivery from March next year.