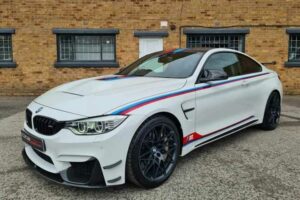 Don't fancy a new M4 CSL? Well, the old DTM was more special than you might remember…

Remember the old BMW M4 GTS? Quite the M car it was, with 500hp from its straight six thanks to water injection, three-way adjustable suspension, ceramic brakes and a 7:28 Nurburgring lap. Which still makes it faster than the new Touring. And quite a few things, actually – anything going less than seven and a half minutes isn’t messing around.

Trouble was the M4 GTS looked pretty divisive – mainly thanks to the orange bits – and that facet of the car tended to dominate the discussion rather than what it was like to drive. A list price twice that of a standard M4 didn’t curry much favour, either. BMW made 700 GTSes, with around 30 coming to the UK, and a discussion thread about crashing into Halfords continues to run (probably) to this day.

But the M4 GTS story didn’t end once all those original cars had been sold. Because the mechanical package returned in the M4 DTM Champion Edition, a car launched at the end of 2016 to celebrate Marco Wittman’s title. Which is pretty cool; normally these cars tend to be little more than stickers – see the M140i Championship Edition – so to have the full GTS makeover applied to a 200-unit production run is notable. It was just as serious an overhaul, too, just without the orange. Look at those seats!

Furthermore, while a white 4 Series daubed with the M tricolour and fitted with a big wing won’t be universally popular, it’s easy to imagine the DTM winning more fans with its looks than the GTS. This isn’t race car for the road whatever the marketing spiel might have said, though it could be said with more conviction that this carries off the GT3 RS-style makeover with greater success than the GTS.

The DTM has additional appeal for collectors as a rarer car than the GTS, with only 15 from the 200 ever sold here. So it’s pretty incredible that six of those are currently for sale on PH, or 40 per cent of the UK allocation. There’s everything from delivery mileage examples that are five years old to those that have racked up almost 15,000 miles in that time. This particular DTM sits somewhere in between, with 3,000 miles, a full BMW service history and two owners.