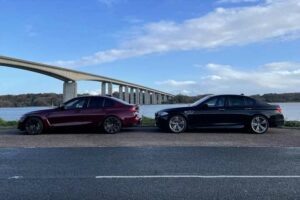 Perhaps more than anything else, it’s the asking prices of the latest BMW M3 and M4 that have caused the most consternation among fans. A starting price of £75k is perceived as too much for the 3 Series flagship, not helped by the fact that its predecessor cost almost £20,000 less when new. Add in a new swathe of expensive options (£11k Ultimate Pack, anyone?) and it’s easy to see why some might be put off the latest M3. And that’s before considering any other contentious points…

But there’s another way of looking at the G80 M3 Competition, and that’s as an indirect M5 successor. Many reviews have alluded to that already, as here is an M3 that’s larger, heavier and plusher than ever before – even with a welcome dynamic edge, the comparisons with the original M saloon were somewhat inevitable.

Full disclosure and all that before we begin – the M5 here is owned by my father-in-law Russell. As such, even if his car was a pile of junk (it isn’t, thank goodness), my words might be a little more tactfully chosen than usual. Not least as he reckons this is the best car he’s ever owned, from a history that includes M3s, XJRs and similar – he likes a fast four-door.

Though a Tracy Emin installation would look subtle against the new M3, it is remarkable just how discreet the old M5 is. Beyond the badges and bigger brakes behind snazzier wheels, it really could be any old 5 Series. Which has always been part of the M5 appeal, and has largely continued into the current generation. But what was perhaps construed as a little too modest a decade ago now looks pleasingly restrained against the newer car.

Despite not being separated by that many years, the differences between M3 and M5 are stark on the road. Though the familiar suite of configurability is there in the old F10 – from shift speed to damper stiffness and steering weight to throttle response – it’s a much more mellow performance car than the new Competition. The ride is softer, turn in less eager, sound almost non-existent by comparison. Part of that will come from being a 5 Series instead of a 3, naturally, but what marks out the current M3 – the immediacy of the front end, tautness of the ride and raucousness of the engine – can also be found in the latest M5. It represents the new breed of M cars; the F10, for all its tech, feels a lot more old school.

Well, mostly. Because this is the only generation of M5 with a dual-clutch gearbox, and it shows up the new car. Which, as someone who has defended the torque converter-equipped M3, came as a surprise. But the immediacy and excitement of DCT can’t be matched, the way that upchanges can flash through at 7,000rpm (it was warm Russell, honest) cannot be replicated by the auto. The downshifts are still rapid, too, and it functions just fine as an automatic. The M cars didn’t feel to have lost a great deal in the switch to a conventional auto, but a drive in this M5 has clarified it – a great dual-clutch is still better.

With this F10’s engine still in use powering the current M5, it should come as little surprise that it remains fearsomely fast. With the additional capacity and cylinders, it feels to rely less heavily on its turbochargers than the M3, speed piling on in quite a linear fashion. That said the S63 V8 feels no less eager to rev than the S58 six, and of course the mid-range is mighty. The M5’s is a great powertrain let down by a dull soundtrack; there’s neither the exhaust nor intake noise befitting of a car this fast, the sound muted and plain. It certainly hails from the dubious early days of sound manipulation.

Though BMW has clearly made dynamic progress in the past 10 years, the M5 is still a really nice car to drive. It’s perhaps a little aloof against the M3, not helped by a lofty driving position and vaguer, stickier steering, though on the flipside it’s also the consummate cruiser. The serene refinement may well have put people off when the M5 was new, the model perhaps too cushy for a BMW Motorsport product, but it’s a heck of a nice way to travel. And the familiar M attitude is never that far away, the relationship between throttle pedal, V8 and rear wheels perfectly honed and a joy to explore.

Stonkingly fast, nicely balanced, a tad underbraked and immensely subtle means this M5 still ticks a lot of the traditional boxes for an M car. But the configurability hints at what was coming, something the M3 in particular has run and run with.

Furthermore, while I suspected the old car might show up one or two character deficiencies in the M3, it actually proved what an achievement this new Competition is. Because not only is this a more exciting driver’s car than the M5, it’s damn near as refined, almost as spacious and even nicer to sit in. The G80 has broadened the bandwidth of the M car, seamlessly combining the requirements of a luxury saloon costing this much with the demands of the hallowed tricolour. With a stern low-speed ride, yes. But the rest of it is mighty, taking a lot of what makes this old M5 likeable and adding even more ability. Perhaps it’s just a shame the look hasn’t remained so unassuming.

So yes, the notion of a new M3 as now the de facto M5 (with the actual M5 now in a six-figure luxury sphere) actually make complete sense. Dare it be said, too, but those spending £80k on a M saloon now are getting a better performance car than they were in 2012, whatever the badge. Which isn’t to do the M5 a disservice, of course; I really enjoyed the powertrain and its less overt way of doing things. It now looks the M5 to buy, too, as classics continue to appreciate and these linger around £20,000. Let’s not forget this was a five-star car in plenty of reviews, too, described as “the ultimate super saloon” in one – “where incredible performance matches ultimate luxury”. And the M3? Now even more than ever, it raises the question of spending any more on an M car. It really is that good. What that means for the next 10 years is anyone’s guess, but BMW has proven itself pretty handy at churning out sports saloons over the decades, so let’s keep the faith. And if the M3 really follows M5, it might be vaguely affordable by 2031, too…