BMW i7 electric sedan images leaked ahead of unveil 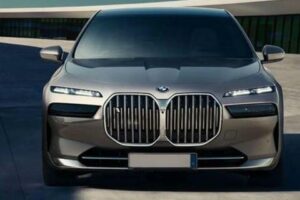 BMW is all set to unveil the all-electric version of its flagship sedan, the i7, on April 20, 2022. Now, images revealing the front end of the upcoming electric sedan have leaked online ahead of its unveiling.

The images showcase the new BMW i7 electric sedan’s front fascia with the split LED headlights, similar to the new X7 SUV. The setup features the LED daytime running lights on top with the integrated turn indicators, while the main headlamp unit is positioned below. Further, the lights can be seen flanking the brand’s large signature kidney grille, which is expected to come with an illuminated frame. The front bumper features air vents at either end, with a central air intake right at the bottom.

The interior of the new-gen 7 Series is expected to debut the BMW theatre screen – a 31-inch 8K ultrawide display for the rear passengers, which will also be offered on the i7. Other features expected on the BMW i7 include power doors (opening/closing), a newly-developed panoramic sunroof, a fully-digital instrument cluster, LED lighting and plenty of other tech and connected features.

The upcoming BMW i7 is said to be underpinned by the brand’s CLAR platform with the iX derived electric powertrain. The electric sedan is expected to offer a power output of over 600 BHP, while the range is expected to be between 580 – 610 km on a single charge (WLTP cycle).