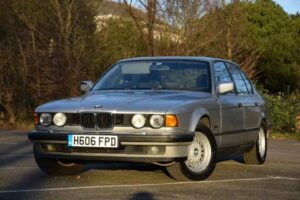 Faded grandeur for three and a half grand

Hollywood loves a mash-up, and not just when a once-edgy comedian tries to talk trash about an A-lister’s wife at a major awards ceremony. Topical humour, ladies and gentlemen, at no extra cost. But not that, I’m referring instead to those frequent cinematic attempts to combine genres or merge different fictional realities. These ranging from the masterpiece that was Alien versus Predator to the bewildering assortment of superheroes being dispatched to flaunt their underpants in each other’s universes.

At PH we try not to cross the streams between our own franchises of faded stars. Shed of the Week will always be the website’s premier cru of premium crud, and also where Tony demonstrates his mastery of a finely crafted double entendre. Brave Pill has a different, less frivolous mission: highlighting the spikier risks of cars you can’t afford to throw away when they break down. Nor will you find any smut here. If I catch the slightest hint of innuendo I’ll whip it out and bang it on the table.

Yet sometimes the shifting sands of automotive fashions and values create what the car industry seems to have spent the last decade trying to deliver: an irresistible crossover. Which is what has happened this week, with this faded but enticing E32 BMW 735i. It’s here as a Brave Pill, but could easily have been one of Shed’s Friday morning liveners not very long ago.

Actually, 13 years to be precise. Back then the lower reaches of the classifieds were packed with so much cheap brawn that a car had to be truly special to stand out. Which is what happened in June 2009 when the seller of a very similar G-Reg 1990 E32 735i was so keen to have his car featured he invited then shedmeister Riggers to break the fourth wall by coming to drive it. That car was being offered with nine months’ MOT at the bargain price of £899, and it found much love in the comments – “shed of the decade” according to one – and even had Riggers contemplating selling his television to buy it. The database has somehow lost the images over the years, but the warmth of the critical reaction is still obvious.

Those were simpler, cheaper times – when a young man could sell his telly and buy an XL executive saloon. Back in the cold light of 2022 our Pill E32 wears a later H-late plate, a bigger 142,000 mile odometer score and a fair amount of the low level patina to be expected on a car inside its fourth decade. It’s also up for £3,500, a price tag that – even when the fact 2009 pounds were worth more than modern ones is factored in – still means it is more than two and a half times the cost of that tidier, lower mileage Shed. Yet against the wider market it doesn’t seem overpriced; there are many knackered four-cylinder examples of the E30 3-Series held together by little more than paint and optimism being offered for more than this.

While the 7 Series is never likely to be as cool or desirable as an E30, it’s got the smaller car beaten on both performance and practicality. This was an era when BMW liked to divide model numbers by five, and the 735i represented the mid-point of the E32 range, between the base 730i which contemporary reports reckoned felt slightly overwhelmed and below the much rarer (and much costlier) V8 powered 750i. The 35i was still pretty special; anyone who did their growing up in the eighties or nineties will likely remember the excitement of seeing the shiny boot badge and realising it meant the car was packing a three and a half litre engine under that long bonnet.

Granted, the 208hp this highly-bred 12-valve six-pot made sounds less impressive to modern ears, as does the 9.0 seconds it took an auto-equipped 735i to drag itself from 0-60mph. But a top speed of 141mph was hardly hanging about, and BMW’s M30 big sixes from this era are all charismatic companions, with plenty of mid-range shove and a cultured snarl when worked hard.

When it was new the E32 was usually seen as being the more dynamic choice than the W126 Mercedes S-Class it was launched against. Which it was, but in the same way that a trampoline is more sporty than a water bed. You probably wouldn’t pick either for a trackday session. The 7’s chassis was tuned to deliver high-speed stability and excellent cruising refinement, and although it doesn’t look as elegant as the closely related E34 5-Series from the same era it does offer impressive cabin space front and rear.

The carpets and cloth upholstery of our Pill are showing signs of wear, but it still looks like a nice place to spend time. Beyond the lack of leather trim – very on-point in these sausage-shunning times – this one seems to have plenty of kit. Equipment includes power front seats with memory, a working power sunroof, cruise and what must have been a very early application for split-zone climate control. The LCD display of what is likely an original Blaupunkt head unit has blown – as they tend to – but the LED trip computer next to it seems to still be working. And also looks to be modelled on a Sinclair Cambridge calculator.

The dealer selling our Pill promises a comprehensive service history, and also that its last owner possessed it for an impressive 20 years. Beyond road rash and a couple of obvious dings, including a sizeable scrape on the driver’s door, obvious issues include dulled headlamp reflectors and water ingress into the front offside foglight.

Reading the MOT history reveals an impressive run of three advisory free passes, the most recent in October last year, although with the car only doing a couple of thousand miles a year. Further back there was a scary fail in 2019 for a leaking fuel pipe, and another flunk the year before when most of the nearside front suspension was declared hors de combat. Yet the fact the car recorded clean passes shortly after each fail suggests it has been treated to plenty of love and expenditure.

So there you go – shabby, leggy and considerably more expensive than it used to be, but this 735i is still a usable proto-classic that looks like good value in these inflated times. You certainly wouldn’t get much W126 S-Class for the same money. Which leaves the question of what the next Pill/ Shed mash-up should be called. Probably Brave Shed. Pill of the Week would likely attract the wrong crowd.