BMW 7 Series Drives Over 1,000 Miles On A Single Tank Of Diesel 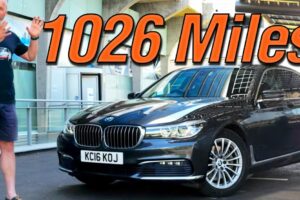 Who said that diesel was dead? Not Joe Achilles, as the popular YouTuber has pulled off the unthinkable by driving 1,026 miles from London to the Spanish capital of Madrid on a single tank of diesel fuel, thanks to a 2016 BMW 730d.

With hybrid and battery power taking the limelight over the past few years, diesel has slowly faded out of popularity, with many car manufacturers dropping the fuel from their lineups altogether. However, we are all aware that diesel-powered engines can deliver unmatchable efficiency on long-distance motorway journeys, and this video (below) goes to show what a modern diesel engine is really capable of.

The car used to pull off the incredible feat was a 2016 BMW 730d, a luxurious cruiser designed to tackle long distance motorway journeys with style, comfort and, most importantly, remarkable fuel efficiency. The car’s ‘B57’ 3.0-litre straight-six diesel engine sends 257bhp to the rear wheels through an eight-speed ZF automatic gearbox, and the setup is designed to squeeze as many miles out of the car’s 78-litre (20.6-gallon) diesel fuel tank as possible. If this video is anything to go by, then it’s safe to say that the 730d does a pretty good job at hitting its design brief, as there aren’t many cars that could drive from London to Madrid on a single tank of fuel.

See also: BMW Reminds Drivers To Use Their Car’s Indicators

In a previous experiment, Joe reached the 900-mile mark with a single fuel tank in his beloved diesel-powered 7 Series ‘Beemer. However, this latest record blows the last attempt out of the water. The journey took Joe and his co-driver a whopping 22.5 hours to complete, and the car arrived at the final destination with 96 miles of range remaining in the tank. 1,100 miles of range seems possible.

We have to credit Joe and his co-driver for pulling off this stunt, as we couldn’t think of anything worse than waking up at the crack of dawn and driving for 22.5 hours straight. Nevertheless, we’re thankful that they have shown off the capabilities of that incredible 730d. Maybe there’s a place for diesel in modern machines after all?