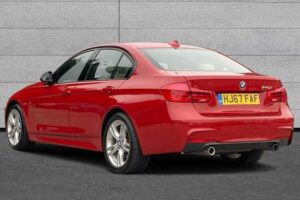 Suggested specs are a big thing nowadays. Of course, friends have always liked to advise on which wheels to go for with a new car and which options are a must have; but now mags will tell you suggested extras and ideal specs, with even configurators encouraging which boxes to tick. It’s all in the name of resale, of course; a manufacturer doesn’t want you choosing a car you’re going to give back to them in three years that they can’t shift. And, well, a lot of what’s suggested tends to be sensible stuff (that often should be standard), so it’s wise to follow the advice.

But what happens when a buyer goes completely against all the recommendations? We see it with supercars all the time, but less so with ordinary cars when people can’t (or won’t) deviate from the norm. So let us present what might be the least desirable (to the majority) F30 BMW 3 Series in the classifieds – which looks absolutely brilliant.

There won’t have been many for whom a 330i or 330d of the previous generation wouldn’t have been enough, blessed as they both are with ample power and torque for a small BMW saloon. But this is a 340i, the flagship six-cylinder model that arrived with the 2015 mid-life update and boasted 326hp and 332lb ft. That meant 0-62mph in 5.2 seconds, and 155mph potential – a fast car, then.

Well, that was with the eight-speed auto that the launch cars were equipped with and the vast majority of 340is would have been sold with. This one kept the six-speed manual, which will have been a bold decision when new; now, less than five years after its first registration, there’s no such thing as a new, manual 3 Series – leave alone one with six cylinders. And that really is just the beginning of an incredible specification, one that goes against all conventional wisdom.

Note the smaller 18-inch wheels and clear glass, for starters. The cream leather is a novel choice, too, especially with the flat red paint. Also inside it looks like this 3 Series was specced without the stereo upgrade (as there are no A-pillar speakers), without heated seats (the button is missing) and with the smallest possible screens. Below the driver’s dials sits an analogue MPG readout like the good old days, and even the iDrive display has thick black borders which – truth be told – we didn’t think was possible on the flagship model. It’s like all the money the first buyer had available was spent on getting the biggest engine possible and not the fripperies, which is pretty cool. Then got their 3 Series in red with cream, like it was a Ferrari.

Now the manual 340i is for sale, offered at BMW Salisbury with, it seems, just that one owner from new. (The spec box at the bottom has ‘0’ for previous owners). It’s covered 56,000 miles since 2017 and looks well for it, wheels unkerbed and interior largely unblemished. If you had to guess, it’s easy to picture one person doting on their 3 Series and using it regularly but not excessively. And probably enjoying the novelty of a 300hp+ BMW with a manual gearbox and rear-wheel drive.

Of course, this won’t be to all tastes. And even at half its new price, £19k isn’t the sort of money to throw away on a curio. A lot of cars have a lot of the same options because those are what’s popular with the majority of buyers. Red has seldom looked good with all-red rear lights, and we’d argue the same is true here. But as the manual gearbox dies out, so its appeal increases to its advocates. As the antithesis of the usual sports saloon seen in the UK, we can’t help but love this 340i. Get the boot badge off and the ultimate Q-car is yours.