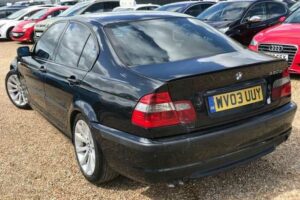 The 330d is pure Shed gold, obviously – but its odometer reading is the real star

Big mileages will scare many folk away from a used car, but what about really big mileages? You know, not just once round the clock as we used to say when analogue odometers went back to zero after the 99,999 mark was reached, but twice or even three times round it? Is there any value in the law of Trigger’s broom which says most parts will have been replaced at least once, so a mega-miler is actually a good buy? Or is it more likely to be a goodbye to whatever money you sink into the dratted thing?

The internet is not short of stories of people buying normal mileage cars which then break down in a terminal fashion almost before they’ve got to the end of the seller’s street, which is why Shed came out of the dodgy used car selling business when he became too old to efficiently defend himself. But how often do you hear about people regretting the purchase of a monster-miler? Expectations are so low, every additional mile covered is a small miracle. You might even find yourself enjoying years of premium motoring experience for blue-collar money. The trick is in bagging something good at the right price.

The E46 BMW 330d wasn’t good when it was new. It was great. The 2.9 turbodiesel’s sweet mix of high torque, lowish fuel consumption and seven-second 0-62 times made it a popular choice among employees with an appropriate standing in the company. Plus, 335d mapping is legendary in these parts, and a 330d is only five off that.

Today, a good E46 330d with a low six-figure mileage can fetch £3,500, or even more for a sub-100k car. Our tidy-looking manual 330d Sport with black leather and a recent MOT showing just a couple of minor advisories seems ridiculously cheap at £650. That’s because of the equally ridiculous mileage of 310,000, making this BMW comfortably the leggiest car ever to appear in SOTW. For an 18-year old vehicle it breaks down to an average annual mileage of 17,000, or 325 miles a week. There’s an Apple logo on the back. Might it have been owned by a motorway-pounding IT sales or troubleshooting bod? Who knows, but this is one car where the oft-abused sales phrase ‘mainly motorway miles’ would be easy to take at face value.

More to the point, what might it be like with 310,000 miles under its wheels? Well, if you apply the Trigger’s broom theory to it, as long as the servicing has been properly kept up (which we don’t know about), it could be surprisingly good. Everything that could go wrong must surely have gone wrong already, though it has to be said that with this sort of mileage, it will be well into the replacements of the replacement parts.

What are the most popularly breaking parts on one of these? Plastic swirl flaps got eaten up and injectors were famously a weak link, the back one of the six on a 330 being especially sweary to access. Pumps for fuel, water and steering were all known to blow, and not in the factory-approved fashion. MAFs and EGRs were also problematic. Some said that the turbo unit lasted longer on the 330d than it did on the 320d, a theory presumably based on it not being leant on quite as hard thanks to the more effortless power of the bigger motor. You’d hope that was correct because parts such as these were not cheap.

The advisories in February’s MOT pass were for slight play in a front wheel bearing and a non-excessive oil leak, a pleasantly short list. The list of stuff that needed to be fixed before the tester would sign it off was longer, but the items on it were mainly general wear and tear: front tyres, some suspension bits, and a prescription windscreen. Not really. Everything bar that one wheel bearing and the oil leak was sorted for the retake.

Obviously no car with over 300,000 miles on it will ever be in mint condish but this one scrubs up pretty well. There’s a bit of what looks like paint damage on the nearside edge of the boot lid, which could be concealing something more sinister, but the interior seems nothing worse than nicely lived in.

Doubtless there will be a few who will throw pelters at this old soldier, and its final destiny may well turn out to be a purple paint job, a hydraulic handbrake and a sad demise on the gladiatorial drift pans of olde Englande, but you’d like to think there’ll also be a few on here who will respectfully doff their hat to it – and maybe one who will give it the quiet retirement it deserves.