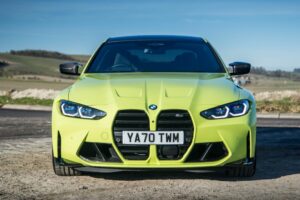 Many column inches have been devoted to the gigantic kidney grilles BMW has been fitting to a great deal of its M models recently, as well as thousands of angry Internet comments. The controversial design trend doesn’t seem to be putting off the people laying down their hard-earned for a fast BMW, though.

BMW M GmbH posted yet another year of record sales, growing by 13.4 per cent to 163,542 units in 2021. The result means M has more than doubled its yearly sales in the space of five years. We haven’t seen a model-by-model breakdown yet, but BMW has said the new G80 M3 and G82 M4 “performed especially well.”

As you might have noticed, that’s a lot of different models, which leads us to our caveat – the M range has grown significantly over the last few years, helping fuel this meteoric rise. The tail end of the year saw the launch of the i4 M50 and iX M50, and with further M newbies like the iX M60 and M2 set to arrive in 2022, you wouldn’t want to bet against 2022 breaking records too.

It’s good news for the BMW brand as a whole, which grew its sales by 9.1 per cent to 2,213,795. This means BMW has ousted Mercedes from its spot as the world’s best-selling premium brand.

In terms of single countries, China was BMW’s biggest market, with 846,237 cars sold there alone, an 8.9 per cent increase compared to last year. In the USA, sales went up by nearly 20 per cent to 366,574. There, 70 per cent of models sold were X-branded SUVs.