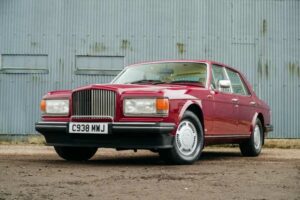 A return to some (very) red meat…

When we loaded last week’s Austin Ambassador Brave Pill into the website’s back end, a process as smooth and seamless as stoking a spinning gearbox with washers, we weren’t expecting the reaction it received. Yet, with 236 comments (and counting), this fine example of British Leyland’s worst era seems to have triggered more nostalgia than a Battle of Britain Memorial Flight display over a Rolling Stones Concert.

Much of this was, to no great surprise, questioning the £5,995 being asked for this slice of early eighties kitsch, that figure being close to its original RRP. But a significant amount was singing its praises, several PHers going so far as to reckon it looked well priced given the rising interest in more obscure new-age classics.

With that in mind, here’s something not entirely different. It’s another British-built car from the same era which would have cost nearly eight times as much when it was new, but which is now being offered for a modest £2,500 supplement over the Austin. Being a Bentley Turbo R it also has twice the cylinders, more than double the power, and will travel less than half as far on a gallon of petrol.

Beyond running costs that would put many helicopters to shame, the R’s relatively appealing price is due in large part to the all-powerful forces of supply and demand. While many more Ambassadors were built than Turbo Rs, survival rates have been radically different. So while there seem to be only 16 of the little-loved Austin still on the road, the Bentley has fared far better: How Many Left reckons there are just over 900 extant, split almost evenly between taxed and SORN’d.

This isn’t the first Turbo R to feature in Brave Pill, although the previous example was back in the pre-Covid days of May 2019, when Boris Johnson was a Future England Captain rather than a former one. That one was a facelifted example painted in a sensible shade of blue, and late enough to have the Arnage-esque interior fitted to later cars. This week’s offering is a far earlier example finished in a far jazzier hue – “virtually blemish free Claret” according to the description – and with the original cabin.

Although replete with walnut, leather and carpets deep enough to lose a ferret in, our Pill definitely dates from the time before Crewe discovered the new-fangled art of ergonomics, the R’s dashboard seemingly extended into the centre console through a series of tiered racks to accommodate the various controls and instruments that couldn’t be fitted higher up. While the advert’s claims that the switches and chrome plating are “reminiscent of a five star ocean liner” seems as purple as the upholstery, the car clearly lacking an Engine Order Telegraph, it really does seem a splendid place to spend time.

Prior to the arrival of its W12-powered models, the Turbo R came close to the top of the list of the brand’s greatest hits. Its arrival followed the epiphany in the early ‘eighties that Bentleys might sell better if they were distinguished from their Rolls-Royce sisters by more than just badging, but also with extra performance. The first of this new way of thinking was the Mulsanne Turbo, launched in 1982, which used a boosted version of the 6.75-litre pushrod L-Series V8 to make around 300hp. This was a fair old whack by the standards of the era, and more than enough to prove that the Mulsanne’s chassis would need some bigger revisions to cope with it.

Which is, in essence, what the Turbo R was. Behind the new name the powerplant remained the same, but with significant underbody changes including the arrival of a Panhard rod to better locate the rear axle, stiffened springs and dampers and a new anti-roll bar at the front. It was an immediate hit by the standards of the modest volumes the company managed in that era, more than 7,200 being built between 1985 and 1997.

Our Pill dates from 1986, meaning it should still use a carburetted engine in place of the fuel injection that arrived only slightly afterwards. The single underbonnet shot doesn’t give the non-expert a sufficient perspective to make a call on which fuel system is fitted, but it’s likely some knowledgeable PHer will be able to tell at a glance.

Beyond the slight difference in plumbing there doesn’t seem to be much impact on either performance or fuel economy. These being, respectively, ‘plenty’ and ‘ouch.’ While Bentley didn’t believe in quoting performance numbers at the time, at least one U.S. magazine ran the Turbo R from 0-60mph in just 6.4 seconds – impressively brisk given a three-speed autobox and the car’s porky 2450kg kerbweight. Fuel is consumed at a rate many speedboats would be proud of. Averaging 15mpg from a tank would require a gentle right foot, while enthusiastic progress in this era of £2/ litre unleaded will quickly move the Turbo R towards the pound-per-mile barrier. Which will at least make calculating the cost easier.

On the plus side, the need to keep the vast 108 litre tank from running dry is only ever one of the considerable expenses of running a Turbo R, with the need for substantial amounts of routine and (almost certainly) non-routine maintenance. Our last Turbo R Brave Pill got some shell-shocked owners contributing in the comments, with PHer Balmoral admitting to getting rid of one after it cost more than £9000 in upkeep in just one year: “I didn’t mind £3k here and £4k there, year in year out, but that was the ‘it’s got to go’ moment.”

Our Pill’s online MOT history gives a fascinating insight into the give and take of keeping a car like this on the road, with irregular gaps between tests and periodic virulent outbreaks of red between clean passes. Digging down proves that few of the fails and advisories have been too scary: non-functioning lights, too much carbon monoxide, ineffective brakes and our old friend “oil leak, but not excessive.” There have been a couple of mentions of rust, but none for more than five years, and the mileage has been creeping up as slowly as a sloth on Mogadon, having covered just over 10,000 between November 2007’s test and the most recent in January. Nevertheless, it’s hard to get too picky given the Turbo R’s £8,495 asking price. That’s barely more than half of the next-cheapest example currently in the classifieds, and actually makes it cheaper than the R we ran three years ago. In terms of mechanical peril an elderly Bentley is certainly braver than an Austin Ambassador, but will it find as much love?