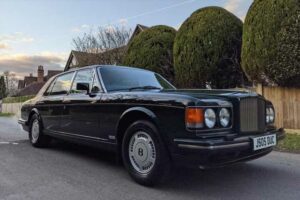 This Bentley has been driven most of the way to the moon. And would you just look at it…

Back in the 1980s, Bentley was close to being dropped by Vickers, which had taken over ownership at Crewe from the start of the decade. Rolls-Royce had all the allure, and Bentley, which should’ve offered a sporty alternative, was basically a badge-engineered product without the right badge. The Bentley Mulsanne Turbo put some distance between the brands, with the fitment of a large, Garrett T3 blower to the good-old 6.75-litre V8, but, while it added straight-line pace, the Mulsanne’s boat-like cornering flawed any attempt at sportiness. The Turbo R sorted that out, and, from then on, Bentley soared – in both standing and sales.

The R was for roadholding, and it added much-needed suspension enhancements that were dictated by then engineering director, Mike Dunn. These changes included stiffer anti-roll bars and firmer damping, along with a Panhard rod to limit the lateral movement of the rear subframe. It worked. Finally, Bentley had come up with a car that was powerful and, relatively speaking, wieldy.

Development for the Turbo R didn’t stop there. It was constantly improved throughout a life that ran from 1985 to 1997 (1999 if you include the RT that extended the run). The early cars came with twin Solex carbs and a three-speed GM Hyramatic auto. From 1986 it ran with Bosch KE2 Jetronic fuel injection and a GM 4L80-E four-speed auto – although still with a column shift (the floor-mounted change came in 1993). A year or so later, the Jetronic was upgraded to KE3, which continued with mechanical injectors but a K-Motronic control unit. It wasn’t until the major facelift in 1996 that the Turbo R gained Zytek electronic injection along with aesthetic changes that included new door mirrors and bumpers.

Being a 1992 model, this car has the benefit of the four-speed box and Bosch injection. It also has a mega service history – most of it from Broughtons of Cheltenham, which supplied the car new. The Turbo R’s current owner has told us that, along with the service receipts, there’s a two-inch-thick folder cataloguing the all the communications (not just those related to servicing) between the car’s second owner, who had it for a quarter of a century, and Brougtons. To some that would be meaningless, but to a collector it’s priceless and adds to the impression that this car has been seriously looked after.

Speaking of which, it looks in fine fettle. It’s been garaged all its life and mostly chauffeur driven, and that shows in the coachwork and interior. Both look remarkably good for a 200k-plus miler. And the Brewster Green paintwork and Parchment hide is a lovely combination, especially with the sympathetic Spruce Green top roll and matching carpets. Also, the burr walnut looks rich and has the sort of beautiful inlays that sets Crewe-built cars apart. It’s had some recent investment, too, in the form of new fuel and suspension pipes, rear suspension spheres, auxiliary belts, radiator, oil cooler and engine mounts. That lot won’t have come cheap and all bodes well.

Some general things to looks out for with SZ cars include the head gaskets, which the advert mentions in passing. The failure is brought on when the antifreeze isn’t renewed regularly, and it wasn’t truly sorted until 1997 model year. With a service history as good as this, though, the antifreeze changes ought to have been regular and therefore less of a concern. You should also check the suspension bushes, especially the compliant mounts and the compliant lever bushes that fail and cause wandering on the road. This car’s had the dampers upgraded to Bilstein units, which is a sensible addition that improves the handling.

Electrics aren’t a major issue, but that doesn’t mean there won’t be failures. The nice thing is that a lot of it is serviceable – even the relays can be stripped and cleaned. Another area to looks at is the aluminium bodywork. Panels blister so it’s a good idea to look for a garaged car like this, rather than one that’s lived outside in the elements. Yes, parts are expensive, but there are plenty of good specialists out there and even main agents can provide cost-effective labour rates: HR Owen’s labour rates start at £89-per hour for older models such as this.

Some might see this as the high-miler from hell depending on you regard old Bentleys generally, but from how it’s described and the history it comes with, it could well be an absolute steal. It’s certainly a very cost-effective way into Turbo R ownership. There are no guarantees, of course, which is true of any car with any mileage, but £12,995 seems like less of a stake, which to me makes this example very tempting indeed.