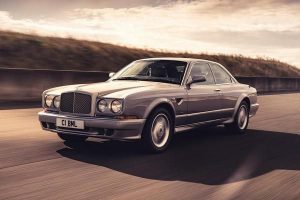 Once the most expensive car in the world, the R is now a charming reminder of old school Bentley

Nothing on four wheels makes the 1990s seem further away than the Bentley Continental R. Introduced at the beginning of the decade and running to the launch of the Continental GT in 2003, it was the first Bentley not to have a Rolls-Royce equivalent in almost 30 years – as well as the first Crewe two-door made in more than a decade. Moreover, it was important for ushering in the four-speed automatic into a Bentley product, assisting with the onerous task of getting hundreds of horsepower and many more pound feet to the tarmac. The demise of three speeds was presumably quite the talking point in 1991. As was the price: £168,294 – or £363,000 in today's money.

The keen amongst you will notice this is not just any old Continental R, either. It isn't a Continental T, either, the sportier of the Conti models with a shorter wheelbase that just snuck in under three metres. Nope, it's a Continental R Final Series, one of 11 made right at the end of the production run in tribute to the icons which had established Bentley as maker of its own palatial sports cars – and not simply Rolls-Royces with Flying Bs emblazoned on. Given where the brand has gone since 2003, you'll forgive a little reverence around these late Continentals as true 'end of an era' vehicles. Prices have begun to reflect that status, too.

There are some very obvious attributes that make the R feel as period specific as an Oasis megamix, the sheer size being one of them. We still have big cars today, sure, but not like this. The overhangs measurable in furlongs, the 18-inch wheels, the widebody flares and the single bazooka of an exhaust pipe would never be signed off today, dating the Bentley as accurately as a tree trunk. It could never have existed in anything other than the decade which, by the end at least, was brimming with swagger. Yet is now more than 20 years behind us. For some idea of scale, the Continental R's 5,340mm length surpasses even that of the new Flying Spur, which measures up at a mere 5,316mm. So much presence and confidence has seldom been summoned up by a car on such small wheels and with such a vast expanse of glass.

The interior also carries off that neat trick of appearing both really quite old and undeniably impressive. Where you would now expect to see screens and displays there's a smattering of beautiful chrome-rimmed dials and acres of wood, informing the driver of everything from boost pressure to oil temperature, battery amperes to the time in New York. Or whichever market time zone was most relevant. Plus, obviously, there's the almost overwhelming aroma of the finest hides possible to purchase at the time. The Continental's is a lavish, imposing, esoteric and occasionally bewildering interior (one button just has an oil can on it, another says 'Fuel/Mirrors') but it's also an unforgettable one. You'd expect nothing less, right?

The Final Series driven and photographed here has covered just 5,000 miles since new, and is therefore as close to a box-fresh example as is surely now available 17 years after production has ended. It starts without fuss or delay after a turn of the key and a press of a nondescript, unmarked button, settling to a muted, murmuring idle. The tacho marks out every 500rpm as would be found every thousand with a conventional engine; still, with only 4,500 revs to use, it helps keep better track of progress. And, for the driver, allows him or her to marvel at how little mechanical effort can correlate with such unabating speed.

Unsurprisingly, the 6.75-litre V8 steals the show here, powerful as a typhoon but as mild mannered as a grandparent. It appears to roll along on almost dozens of rpm rather than hundreds, the Continental living up to its name after about five minutes – at the turn of the century there was surely no finer way to travel. It still feels indecently fast, too, an impression heightened in the R by a rising prow, whistling turbos and subdued (though detectable) V8 roar. Official numbers were in the region of 325hp and 455lb ft; again, it will come as no shock to find it's the latter which dominates, the combination of enormous capacity and forced induction generating mighty performance from little more than idle.

Accelerating in a Continental R means wistfully acknowledging the slow orbit of the rev counter and enjoying the interior serenity of a smoking lounge, while the countryside goes increasingly and insatiably blurry. The pace at which the speedo's 10mph increments pass just doesn't let up, yet the peace is only ruffled when a gearchange thunks through. Still, with half the ratios of a modern Bentley, that doesn't happen very often. The driver merely sits there with the power of an empire at their disposal. Fitting, when you're perched on an immaculately quilted chair.

Anyone familiar with a modern Bentley will find this car's dynamic performance somewhat shocking, despite a kerbweight not that far apart from the current day. But it's hard to be overly critical; in an era before active anti-roll, modern tyre technology and ceramic brakes, the Bentley feels merely of its time. Which means it's languid, unhurried and a little ponderous at times – and no worse for it. Cars were like that then, and it simply makes you more considerate of the car's mass and dimensions as opposed to blundering down a road as blithely as four-wheel steer and active differentials allow you to. Whoever is behind the enormous steering wheel is captaining the Continental R as much as driving it; scanning the landscape ahead for potential hazards while making the most of a formidable powertrain at every opportunity. There's never any danger of forgetting the experience, let's put it that way.

Naturally that's the central tenet of the Continental's appeal, and probably explains why values have climbed so substantially in recent years. It's a Bentley experience dripping in retro charm, historical significance and exquisite craftsmanship, albeit with performance that still stacks up (and surprises) in a 21st century context. In some ways there are parallels to draw with the Aston Vantages of the time as well; both were heavier, larger and more profligate than they probably should have been, even then, yet both perfectly encapsulate an era and a type of car so well that their respective charm is irrefutable. That both companies embarked on drastically different paths following those models only serves to bolster their status. Twenty years on from launch, perhaps more so than any other aspect, it's the knowledge that cars like this – machines this roguish and incorrigible – did once exist, and can still be merrily driven in a modern context that makes them so collectible. Bentley's reputation was forged on grand tourers like the Continental R, and it remains unrivalled as an experience even when measured against the firm's current crop. There really is nothing else like it. And it's damn near irresistible as a result.