Home » Auto News » Baleno rams into my dad’s Activa from behind, drags it into a bus

Baleno rams into my dad’s Activa from behind, drags it into a bus 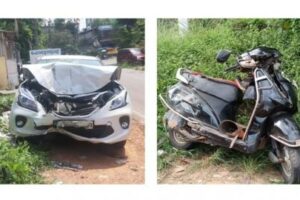 The accident was so severe that everybody at the nearby clinic was terrified by the sound of the impact.

BHPian Sidharth Sankar recently shared this with other enthusiasts.

As this thread is regarding my dad, please let me walk you all through his garage. My dad owns a Classic 500 EFI (2017) and a 2011 Honda Activa which he bought just after retiring from his 20-year-old service with the Indian Army.

He uses the RE for highway runs and touring purposes and otherwise, uses the Activa and which is why it has clocked a healthy mileage of approx 90k km despite the odometer not working for 2 and a half years. Yes, the scooter was starting to show its age and obviously, there were rust issues but the engine was still smooth as butter (quite typical for a Honda).

My dad had initially thought of giving it up a year ago but the showroom offered a very small amount which is quite okay considering the age and condition but he thought “why don’t we restore it? “. And he did which ended up costing more than double the amount the showroom offered. It was a complete overhaul and after the restoration, it was looking and riding as good as new. The paint job was changed to gloss black from sky blue. All of our family members had a good attachment with the Activa, especially me and my mom, as we both have taken the baby steps of motoring in it.

So the incident happened roughly a month ago. My father had gone to buy groceries mid-afternoon. The store is just a km away from our house. Being this time of the day there was not much traffic (our area is semi-urban). He was wearing his helmet as always as he is strict about this. He has always told me to wear my helmet regardless of how far or near I was riding to.

So coming back to the topic, on the way at about half a km from our house there is a small clinic. The road bends towards the right and is comparatively narrower at that particular spot. While my father was on his way, just after this small bend there was a Mahindra Tourister (contract carriage) making a U-turn. This spot has been widely used by these tempo drivers as they run a parallel service in our area and the neighbouring ones. My father slowed down to the left side of the road and came to a stop waiting for the Tourister to clear off. He could have taken the risk and overtook it but chose not to do so as he was in no hurry and due to the above-said characteristics of the road at that point. The next thing he hears is a big sound of a crash and as he opened his eyes he was lying on the road with his helmet on his head (luckily).

My father says he was not able to recall what had happened at the moment. He tried to get up at first but couldn’t as his legs failed. Soon two staff members from the clinic rushed to the scene with a structure and gave him first aid. He only suffered minor skin peeling but the real damage was to his lower back. At the same time me, my mom and my father’s brother rushed to the clinic and took him to a better multi-speciality hospital as advised by the doctor at the clinic in an ambulance. All of us including the doctor at the clinic were a bit worried about the condition of his spine (he is 51 now and an injury like that would be hard to recover from at this age) but luckily didn’t crack. The hospital ran all the tests and the only major injury was a hairline fracture to the lumbar spine and severe bruising to his sacral area.

Analysis of the accident

My father couldn’t recall what had happened. From what we could recall from the accident spot was that a Baleno had hit him from behind. The accident was so severe that everybody at the clinic was terrified by the sound of the impact. The car then dragged the scooter with it and only ended up stopping colliding with the rear end of the Tourister. My father luckily didn’t get sandwiched in between the vehicles (picture attached at the end). The front of the Baleno was completely demolished, the airbags were blown up and the engine bay also suffered huge damage. For our Activa it was over (almost), it was completely totalled. The Tourister only suffered minor damage.

I was all heated up at the spot of the accident. The main thing which made me mad was the initial conversation with the driver of the Baleno. Yes we all are human and we make mistakes, but what does it take to apologise for them. During the entire conversation, he didn’t even apologise once and regardless of being his mistake completely, he started giving me excuses. Below is the conversation between me and the driver in Malayalam translated to English:

At this moment I lost my control and walked away from there or my fist would have ended up in his face. I then along with my family proceeded to take my dad to the hospital. Meanwhile, the police had reached at the spot.

A day later we came to know what had happened actually from the CCTV footage of the clinic. The driver of the Baleno tried to overtake both my father and the Tourister (mind you, it’s quite a blind spot and you can’t see the oncoming traffic properly). He failed to do so due to the oncoming traffic and instead of ramming straight into the opposite vehicle, he steered left ending up in ramming into my dad. My dad was thrown up to quite some height from the Activa and first fell on the bonnet of the Baleno and then on the tarmac. Being a dabba Baleno, the bonnet took quite an impact from my dad’s fall (if it was a German or a Tata I wouldn’t be surprised if his spine cracked at the first impact itself). He did hit his head on the tarmac but the helmet saved him. Some people also had the opinion that the driver was busy talking to the passenger (there were two) which could have distracted him.

Some things I learnt

I do have one question though and please share some info regarding this – Our Activa only had third-party insurance because the insurance company (New India I think) couldn’t give first-party due to the fact that the scooter was over a decade old and had run close to 1 lakh km. So is there any way where we could claim the insurance as it was entirely the other guy’s fault? We are already in the process of a police case. So will the car guy’s insurance company pay for the loss of our scooter? Thank you.

During the initial days of my driving lessons, my instructor once told me “while on the road driving/riding, consider the rest of the people on the road both on vehicles and on feet as madmen. Nowadays that’s the only way you can stay safe. Always be prepared for anything. No road is safe enough.” I laughed then but now I think what he said was in fact true.

Thank you everyone for reading. Please excuse me for the long post. Ride safe. Cheers.