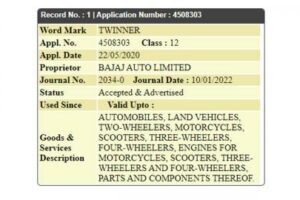 A possible future twin-cylinder model from Bajaj could be called the Twinner.

Bajaj Auto has filed a trademark for the ‘Twinner’ name tag, which has led to speculations that it could be used for a possible future twin-cylinder model.

It is said that Bajaj could either be plotting a new model or an update for the Dominar 400. If the latter is true, then the bike could get an upgraded engine.

It has also been speculated that Bajaj could be working on a Scrambler or neo-retro styled bike, possibly based on the KTM 490’s platform.

It’s quite common for automakers to trademark names well in advance. However, we can never be certain about the name being used on a future product.