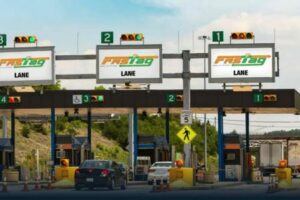 If implemented, the new system is expected to make toll plazas redundant.

The government of India plans to replace FASTags with an automatic number plate recognition system in the future. If implemented, the new system is expected to make toll plazas redundant.

According to Nitin Gadkari, Union Minister for Road Transport & Highways, the government is conducting pilot projects to replace toll plazas with the new automatic number plate recognition system. It doesn’t require vehicles to stop at toll plazas, as cameras read the vehicle’s number plate and the fee is deducted directly from the owner’s bank account.

With the introduction of FASTags, the average waiting time at toll plazas is said to have come down to 47 seconds. However, long queues can still be seen at certain locations during peak hours.

In order to streamline the process of toll collection further, the government is looking into two technologies. The first one is a satellite-based system that will use GPS installed in a car and the other is the number plate recognition system.