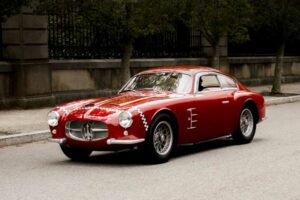 This week sees the return of Audrain’s Newport Concours and Motor Week to the seaside Rhode Island locale, after an extravagant inaugural year in 2019 that saw a large number of enthusiast events and rare classic cars. With a four-day schedule packed with activities, including a Bonhams auction, and being within driving distance from New York and Boston, the event could soon upstage other prominent east coast concours.

The multi-day series of events has already begun, with a variety of seminars hosted in Newport on Thursday.

“Audrain’s Seminars will kick off the celebrations midday on Thursday and carry on through the week featuring notable celebrity hosts such as Jay Leno, McLaren F1 CEO Zak Brown, and Jay Ward of Pixar Animation Studios,” the concours organizers said. “Bringing a close to the day will be two luxurious get togethers—Wine By The Water at Forty 1 North in Downtown Newport; and Hilltop Hangout, a private cocktail and cigar party, at Hilltop Inn on Kay Street.”

Friday’s events will include the Bonhams auction and four other seminars and events for owners and visitors alike. Saturday will see The Tour d’Elegance along with three other satellite events including cars-and-cofee downtown, and the Audrain’s Automobile Museum’s annual fundraising gala along with more seminars.

Sunday will feature the concours event itself, kicking off as early as 6:30 a.m. as cars stream into the show field at the glamorous seaside mansion at The Breakers.

Having attended the inaugural 2019 concours d’elegance that relaunched the Newport concours under the auspices of Audrain’s Auto Museum, we can report that the location was easily the most impressive of any concours we’ve been on the east coast over the past two decades, fitting well into the town’s Roaring ’20s persona with endless mansions lining the southern tip of Newport’s peninsula. This part of Newport is, after all, where the Robert Redford version of The Great Gatsby was filmed.

The atmosphere and setting of the concours certainly matched that time period, delivering 100% of that very particular New England theme on a grand level with the imposing mansion lending a Hogwarts-style flavor and sense of occasion to the proceedings.

We noted that the concours field itself could perhaps accommodate twice as many cars if it so wished, with more crowd-pleasers in the form of more supercars of the 1980s that concours visitors respond to with particular excitement these days, though the emphasis on pre-war cars is certainly understandable at such events.

Visit the Audrain’s Concours and Motor Week website to view the full list of events and purchase tickets.