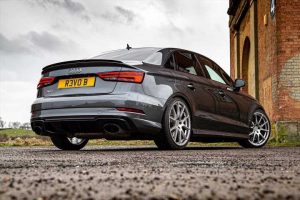 When Audi was forced to introduce a new particular filter to the RS3 back in 2019, most people thought the extraction of 400hp from the newly put-upon five-cylinder unit was an admirable achievement. The updated car was a fair amount quieter, yes, but the 2.5-litre thud in your back remained, only now fewer particles came out of the exhausts to keep the EU regulators happy. For tuners like Revo, though, any amount of strangulation was too much; two years later the firm reckons it has cracked a perfect formula to overcome the challenges of Euro 6b. Behold Revo’s EU (and therefore MOT) compliant RS3 Performance Pack, which is estimated to possess an RS5-beating 470hp.

Like the Mk8 Fiesta ST we tested last week, the demo car you see here features both engine and chassis modifications. But the work under the bonnet of the RS3 arguably goes a step further because it means turning up the dial of an already pretty exotic engine. Using all in-house developed parts, including a carbon fibre air intake, bespoke intercooler and just-finished turbo inlet elbow pipe, Revo once again makes claims for longevity and strength alongside additional power from the cleaner, cooler airflow. Combined, the pack costs £2,933, although customers already in possession of a Revo-mapped RS3 can save themselves £719. Fairly big money, but this is a big-number performance car.

Of course, you can pick and choose between the parts, should you wish. Although, as Revo hopes to demonstrate with its development car, the most rounded performance is said to come from its tailored combination of upgrades. If the buyer prefers, there’s also an option to go the whole hog and delete the pesky filter and add a Milltek exhaust for even more power. But we’ll come onto that in a moment.

We start in the EU and MOT compliant car, a saloon that sits on Revo’s RF019 alloys with 10mm spacers all round. It looks the part, but on start-up and initial driving, it is to all intents and purposes a bog standard RS3, albeit one that shuns the annoying 'wastegate rattle' attributed to RS3s during cold running. That’s thanks to Revo’s new map, which has a coded-in power-limiter for when the engine oil is still cold, so you’re not given the full upgraded whack straight away, which should ease the minds of future second-hand car buyers tempted by a Revo-tuned machine. It’s like night and day when the software opens the gates, though. It’s true that the standard Audi is properly rapid as is, but with every hard squeeze of the throttle in Revo’s machine, the thrust borders on insanity.

This is partly thanks to the unflappable traction provided by Audi’s Quattro system, which channels the reworked delivery – it hits hardest from about 3,000rpm – to the road without hesitation. But it’s also to do with the way in which the reworked five-cylinder comes alive; the acceleration is brutal. There’s plenty of mechanical grip to go with that, no doubt aided by the slightly wider chassis. And while the Audi’s steering remains as numb as ever, you get used to dispatching the full thump of available torque, even in the middle of corners. That speaks volumes about the cohesion of the package, not to mention the underlying ability of the RS3. Even the brakes feel well within their prescribed remits, and Revo's software changes allow for left foot braking, which is handy. Cross country pace is supercar fast, with the predictable, mildly understeering chassis providing enormous confidence, if not much in the handling thrill department.

The eight-speed Tiptronic transmission apparently has no issue with handling the extra power, and while the factory-spec, GPF-equipped exhaust system remains relatively discreet (Revo's map does at least hold the flaps open in Dynamic mode), there’s enough gargle and flutter from ahead of the bulkhead, thanks to the new carbon intake, to keep your ears entertained. Those wanting more can opt for a filter-less, Milltek co-developed sports cat downpipe, turning the engine note into a menacing, throat-clearing bellow, and enabling even more performance. Revo estimates up to 525hp at the crank, although the torque is unchanged at about 443lb ft. So while there’s a little more high-rev gusto in Revo’s GPF-free demo, the mid-range thump is identical. And, of course, the configuration won’t pass an MOT in Britain.

If you’re wondering why the numbers mentioned above are all estimates, it’s because Revo focuses development on extracting maximum performance and only uses a rolling road for numerical validation at the end. That final stage hasn’t happened yet, so the gains are calculations based on the numbers seen on the workshop testbed. Rest assured both demos seem astoundingly fast across the rev range. Of course, for those wanting the most comprehensively uprated RS3, it is possible to go further still and add extras like the Eibach lowering springs fitted to Revo’s Milltek-equipped demo. Predictably, they provide better body control under load, with an inevitable sacrifice in compliance at low speed. Audi’s adjustable dampers probably deliver enough bandwidth for most people – unless you’re specifically after a lower stance, that is.

Thanks to the manufacturer’s extensive use of a shared parts bin, Revo’s RS3 upgrades are generally compatible with the TTRS, with the Performance Pack for that model being identical, aside from a different intercooler. Owners of older, pre-GPF RS3s and TTRSs are in luck, too, and with reduced EU hardware, they can expect the gains to be on the higher side of Revo’s estimates. Those tempted by the offer won’t have to wait long either because the pack is due imminently, along with confirmation of those performance figures. We wouldn’t hang about if you’re interested; a significant portion of Revo’s business is attributed to Audi models, and the new MOT-compliant Performance Pack is unlikely to do its order books any harm whatsoever.