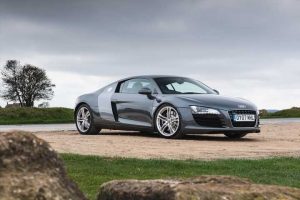 Exactly where I first saw the image I can't remember. Such details tend to fade after a decade and a half. But the image itself is as clear to me now as if I'd first seen it 30 minutes ago, seared in ultra high-definition into my memory. It must have been late 2006, or maybe early 2007. A bright red sports car, clearly mid-engined, sweeps through a corner on the Las Vegas Motor Speedway infield circuit, looking flat and level, narrowly avoiding a line of orange cones. It corners with a very particular attitude, over-rotated for the radius of the bend, front wheels cranked over in the opposite direction.

And that's the thing about the original R8. It looked sensational, as though an alien craft had sprouted wheels to continue its explorations on this planet, but we'd grown accustomed to that. After all, the concept version had first been shown a few years earlier back in 2003. What was most surprising about the R8 was that it had the four-ring emblem on its nose and it followed in a very long line of Ingolstadt performance cars with stacks of performance, bundles and grip, piles of stability and no trace of poise or agility whatsoever – but it was nothing like those. Instead, it had exquisite chassis balance, incisive steering, a fluid ride and genuine on-throttle adjustability. No car has confounded expectations like the original R8 in the years since, and maybe even in the years before.

Even now you have to wonder if the R8 was all Audi's own work. Is there not a hint of a Norfolk accent in the way its suspension smothers bumps; in the way its body glides serenely over uneven surfaces? The R8's virtues are not the sort that fade over time. In fact, as newer sports cars increasingly favour firmer chassis settings, ever more grip and power, paddleshift transmissions, nannying electronics and the rest, the R8's simpler, more honest way of doing things becomes like a tonic. This is a timeless car.

There is a blockiness about the interior design nowadays, in the switchgear and especially in the infotainment graphics. That tends to date the cabin, and while certain plastics can feel hard against your fingers, the overall sense of integrity is beyond doubt. The huge expanse of dashboard that distances you from the base of the windscreen is pure supercar, but the airy visibility is not – you see clearly all around you. The dials are simple and easy to read, while the seating position would take only a nip here and a tuck there make perfect (I want the seat to drop another inch and the steering wheel to slide towards me by the same amount).

Can you imagine a task more daunting in the automotive sector than tackling head-on the Porsche 911 Carrera S? Even assuming you have the badge appeal, the looks, the quality, the laser-guided dynamics, the performance and the character to rival the 911, your contender might still fall short. The Porsche has always managed one more thing better than any other comparable car – on top of everything else, it is usable. Audi realised that, which must explain why the R8 is easy to drive, why visibility is so good, why it's comfortable and relatively quiet and why it doesn't make a fuss of steep ramps and speed bumps.

And yet, with a smaller front storage compartment and no vestigial rear seats, not even the R8 comes close. But in overall terms and compared to its other rivals – the Aston Martin V8 Vantage, for instance – Audi's sports car was nothing like as demanding as it might have been.

The model we're inducting into the PH Heroes Hall of Fame is the first-generation V8 (though the V10 model had charms of its own), specifically the manual car. The stubby little gearlever moves so fluidly around the open gate, its stem click-clacking against those exposed aluminium fingers. The shift is sweet and so well-matched to the weight and action of the clutch pedal, too.

There is an energy and a lightness about the 4.2-litre V8. It doesn't pound with the slow, steady, thunderous force of an ironmonger's hammer, but zip through the mid-range and whip out to 8000rpm, as though there's no inertia at all. You climb the power curve rather than sit atop a wave of torque, the cultured, measured eight-cylinder soundtrack flooding the road behind you. The R8 isn't oppressively loud and nor does its exhaust note seem in any way contrived or engineered-in – it's just the natural consequence of combusting hydrocarbons in eight normally-aspirated cylinders at 133 revolutions per second.

Nor does the R8 feel frighteningly quick. With 414bhp to move almost 1600kg, it's no faster than some modern hot hatches. But it'd be missing the point to long for more straight-line shove. After all, I'd far rather run a smaller engine out to the redline gear after gear than feel a bigger one thump hard for three seconds before I run out of nerve.

While it's steering mightn't be as detailed as a 997-generation 911 Carrera's – whose wheel rim fidgets and tugs in your fingertips – it is calm, intuitive and predictable. So you guide the R8's nose into a bend with confidence, feeling the forces load and the body roll ever so slightly as the carboth axles sharing the burden evenly. It's that balance and poise, and the light-footed way the chassis deals with bumps in the road, the wheels rising and falling in that untroubled way, that seemed so unusual for an Audi back then. In fact, it seems unusual even now.

To make this car shift along a road you really have to work at it – get down the gears to make it lunge at the horizon; steel yourself to use every bit of grip it has; stretch the engine out to the redline; buy yourself time on every downshift so you can roll your ankle and gently squeeze the throttle pedal, otherwise the car will lurch and complain when you step off the clutch; get back on the power early and trust the heavily rear-biased four-wheel drive system to hook up and slingshot you away. The more skilfully you drive this car, the faster it goes and the more rewarding it becomes.

The original R8's qualities are many and they are radiant. And yet, I'm not even sure Audi itself recognises them. When the second-generation R8 arrived in 2015, it did so with a very different character. Gone was the gorgeous V8, in its place the noisier, coarser V10 that hit more forcefully, but which offered far fewer opportunities to wind it all the way out. And there was no manual gearbox option, and the old car's predictable steering had made way for a flighty electrically-assisted rack, and the chassis pummelled the road surface beneath rather than breathing with it…

All poise, delicacy, adjustability and interactivity was gone. The later car is faster everywhere and far easier to drive fast, but it does so much of the work for you you're left wondering if you need to be there at all. Maybe that readily available speed and performance on-tap are precisely what most supercar buyers want.

But I will always prefer the older car's more nuanced way of addressing a road. The suppleness of its suspension, its balance in corners and the sense the whole time that you are a part of the process will stay with me, imprinted as boldly and as clearly as that image of the bright red sports car on the infield at Las Vegas.