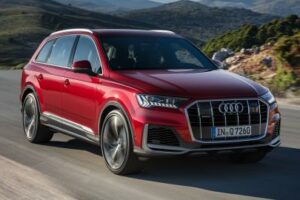 The new Audi Q7 is likely to be offered with a 3.0-litre petrol mild-hybrid engine.

The popular Audi Q7 is set to receive an update. The facelifted version will be launched in January 2022 and here’s what we know so far.

According to a media report, the Q7 will be offered in two variants – Premium Plus and Technology. Select Audi dealerships have started accepting pre-bookings for a token amount of Rs. 3 lakh.

On the outside, the SUV gets a tweaked octagonal grille with a chrome frame, new LED headlights and redesigned LED daytime running lights. The rear features revised LED tail lamps with a chrome bar running the width of the car.

The new Audi Q7 is likely to be offered with a 3.0-litre petrol mild-hybrid engine producing 335 BHP and 500 Nm. It will be paired with an 8-speed automatic transmission and the Quattro all-wheel-drive system.