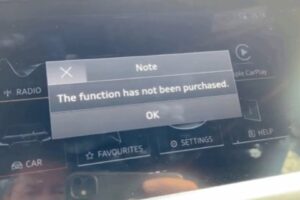 Used to, when a car was missing certain features, you’d just see a blank button in the interior. That still happens, but in case you haven’t noticed, cars are getting a lot more software-based, which means the button blanks are quietly disappearing. As one Audi driver found out, this leads to some rather interesting software messages.

A short clip of an Audi Q4 E-Tron was recently posted to the Mildly Infuriating subreddit where it received well over 110,000 upvotes and nearly 6,000 comments at the time of writing. The owner of the vehicle had decided not to purchase Audi’s tri-zone climate control, yet still received a “Sync” button in their brand new battery-powered SUV. And yes, pressing it did do something—but not what they expected.

Instead of just doing nothing, or, you know, syncing the climate zones, it instead caused a message to pop up on the screen indicating that the function had not been purchased.

Audi U.S. and U.K. both offer tri-zone climate control on the base trim. However, some markets offer tri-zone climate control as an optional add-on. In Denmark, where this particular owner told us they’re based, the add-on costs around $548 (5,114 Krona). The owner acknowledged that they chose against purchasing it but didn’t expect pressing the button to display a message.

Historically, cars with unpurchased features simply had those blank pieces of plastic in place of a button. They couldn’t be pressed, and they didn’t look too out of place as they mostly blended in with the interior. Audi’s implementation here is kind of serving the same purpose, and while it sharpens up the appearance of the interior, it comes with a reminder that’s a lot more in-your-face than a blank button that you simply can’t press.

“Blank buttons aren’t rude,” wrote the owner. “This one is reminding me that I’m cheap.”

Interestingly, the message doesn’t feature any sort of prompt to purchase the function. Many automakers, including Audi, are using over-the-air updates to push feature changes and even promote the sale of software goods.

Perhaps it all comes down to saving money on the production of physical hardware for the climate control system by equipping all cars with the same control panel regardless of features. There’s also the chance that Audi plans to add in-car purchasing at a later date. That much isn’t clear just yet, but whatever the reason, a message reminding you that you hadn’t purchased a feature in your premium EV would certainly irk enough folks.