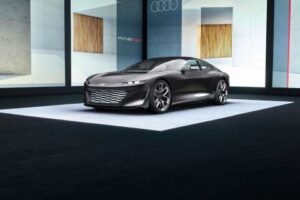 The Grandsphere measures 5.35 m in length and is said to have a wheelbase longer than the current A8.

Audi has unveiled the second of three ‘Sphere’ concepts, in the form of the new Grandsphere. The new Audi Grandsphere concept follows on from the Skysphere model, which was unveiled at Pebble Beach, last month.

However, unlike the Skysphere which was a two-door electric roadster concept, the Grandsphere is as Audi likes to call it – ‘a private jet for the road’. The interiors of the car are said to replicate luxury similar to that of a first-class lounge in a private jet.

The Grandsphere concept is said to feature Level-4 autonomous driving technology. When the system is activated, the car stows away the steering wheel and pedals from view, enhancing the cabin space for both driver and passengers.

Apart from this, the Grandsphere also comes packed with a host of other luxury features, equipment and tech as well. The concept model uses pathway identification to recognise drivers and passengers, allowing it to open the doors automatically, while also adjusting the seats and climate control settings.

The Audi Grandshphere also comes with a wooden surface below the front windshield, which acts as a canvas to project information.

The Grandsphere measures 5.35 m in length and is said to have a wheelbase longer than the current A8. The concept features a fastback style design at the rear, there is no B-pillar, and the car sits on 23-inch alloy wheels. The Grandsphere also features sleek LED lighting all around and a single-frame hexagon grille upfront.

Powering the Audi Grandsphere are two electric motors – one on each axle. The electric powertrain is said to produce a combined output of 700 BHP and 960 Nm. While top speed isn’t listed, Audi claims that the Grandsphere is capable of sprinting from 0 – 100 km/h in just over 4 seconds.