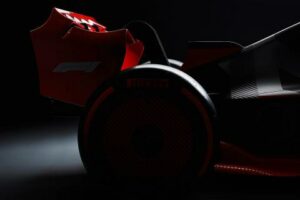 The German car brand is expected to make the official announcement during the upcoming Belgium Grand Prix.

Audi Sport has released a teaser image showcasing an F1 car with the brand’s logo on the rear wing, all but confirming its entry into the sport.

The image showcases the rear wing of an F1 car, featuring the ‘F1’ logo on the side plate and Audi’s ‘four rings’ on the top. While Audi is yet to reveal any details, the caption for the image reads, “more rings are coming, watch this space”, indicating an official announcement very soon.

Earlier this week, there were reports suggesting Audi could acquire a majority stake in the Sauber F1 team. The German car brand is expected to make the official announcement during the upcoming Belgium Grand Prix, held between August 26th – 28th, 2022. As per these reports, Audi will build the F1 car chassis at the team’s facility in Hunwil, while the engine will be developed in Germany.

Adam Baker who was hired for a ‘Special tasks’ role in late 2021, is expected to become the Managing Director for the new team.