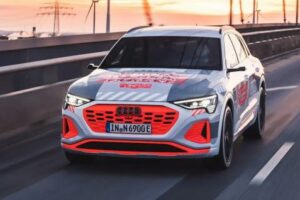 According to media reports, Audi is working on facelifted versions for the e-tron and e-tron Sportback electric SUVs, both of which are expected to be unveiled by the end of the year.

As part of the update, the upcoming e-tron facelift is said to get a number of cosmetic upgrades as well as Audi’s new-gen batteries, which should help improve its range. Reports state that both, the e-tron and e-tron Sportback are expected to get a newly-designed front grille, revised bumpers and restyled headlamp clusters among other updates.

Apart from this, the electric SUVs from Audi are also expected to receive more efficient electric motors and an upgraded electronics system enabling greater energy recuperation. This will allow Audi to offer the e-tron facelift with a range of 373 miles (600 km). In comparison, the 95 kWh battery in the current model offers 400 km of maximum range on a single charge. The Audi e-tron and e-tron Sportback facelift models will continue to be based on the brand’s modified MLB architecture.

With Audi selling the current e-tron and e-tron Sportback SUVs in India, we expect the facelifted versions to make it to our shores too. Although, Audi India is yet to reveal an official launch timeline.