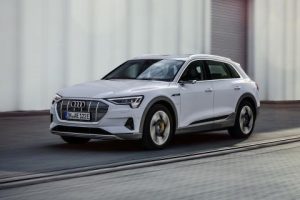 The Audi e-tron will compete with the Mercedes-Benz EQC in the Indian market.

Audi has announced that the e-tron and e-tron Sportback electric cars will debut in India in the first half of 2021.

The Audi e-tron is an all-electric SUV, while the e-tron Sportback is a four-door electric SUV with a coupe-like roofline. Both versions get L-shaped headlamps, LED tail lamps with a light bar running across the width of the car, 20/21-inch alloy wheels, a 4-spoke steering wheel and a digital instrument cluster. The cars get separate touchscreens for the infotainment system and climate control.

The Audi e-tron uses a 95 kWh battery pack that is claimed to offer a maximum range of 400 km (WLTP cycle) on a single charge. It can be recharged to 80% capacity within 30 minutes using a DC fast-charger.

The Audi e-tron will compete with the Mercedes-Benz EQC in the Indian market.