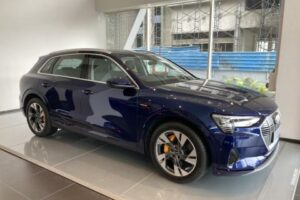 The e-tron is simply one size bigger than the other two. Its more like a “Q6” in terms of size in between the Q5 and the Q7 and has only 2 rows of seats.

BHPian Pippoosh recently shared this with other enthusiasts.

So after a couple of months of R&D including feedback from my friends in other countries where EVs are more mainstream, and a few test drives in real Indian conditions we finally got home an Audi e-tron 55 in Navarra Blue a couple of weeks ago.

We were in the market for a nice upgrade from our 12 year old Honda Civic that has valiantly slogged for 100k Km so far. We started by looking at the new Skoda Superb, but soon enough the desire to upgrade to a luxury brand got us into looking at the Germans. Once you’ve been spoiled by the space on offer in a Superb, then the X1/GLA/Q3, X3/GLC/Q5 or A4/C/3 Series don’t really cut it. With God’s grace, budget not being a constraint, we were soon looking at the BMW 6 GT (the rear spoiler is super cool) and Merc E as options.

Having reached that level and given that we tend to own our cars for a long time, we then decided that might as well go electric now itself and enjoy being a pioneer instead of going the ICE route and then looking for a change in 5-6 years time. So that narrowed the scope down to the Audi e-tron, the Jaguar i-Pace and the Merc EQC. The BMW iX was sold out to the select few nobles in India and the dealer shooed us away like beggars without as much as a “let me note your contact details”.

Key reasons for finally choosing the e-tron over everything else came down to a few simple things in the end:

We’ve done some 400 km in it so far – ride is brilliant, silent and after a while you get used to the driving mechanics which is somewhat a mix between an automatic and a manual – it doesn’t creep forward like an automatic and you have to press the accelerator to make it go, but then there’s no gear shifting involved.

Real world range seems to be between 330 and 370 km, haven’t done enough running to figure that out accurately yet.