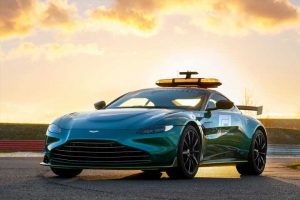 More power and fewer cupholders for Aston's breadwinner – and there's a DBX medical car, too

A brace of newly liveried Aston Martin F1 cars won't be the firm's only representatives in Bahrain later this month. For the first time ever (unsurprisingly) the manufacturer will also supply the official safety and medical cars for the 2021 F1 World Championship, in the shape of a Vantage and DBX respectively. Both cars have been extensively modified to better suit their new responsibilities, and to ensure FIA compliance.

In the case of the Vantage, this was mostly about improving lap times. To ensure that it doesn't slow down the pack too much when called upon to head the field, Aston has increased output from the 4.0-litre twin-turbo V8 to 535hp and broadened the availability of its peak torque. The chassis has been overhauled, too, with detailed underbody bracing delivering improved structural stiffness.

Extensive experience racing the Vantage in the World Endurance GT Championship has informed the alterations, with a new uprated cooling system transferred directly from the GT4 car. Most notable is the comprehensive aero kit, with the new vaned grille and front splitter said to deliver 155.6kg of downforce at 124mph – 60kg more than a production Vantage generates at the same speed.

Plainly the roof-mounted light bar doesn't do the aerodynamic performance any favours, although Aston says even this has been designed to offer the least possible resistance before the airflow makes it to the 'exaggerated' rear wing. Inside the car gets proper race seats with 6-point harnesses and two screens on the dash that provide its occupants with a live TV feed along with real-time telemetry data. The centre console has been modified to incorporate all the switchgear required to operate the sirens, lights and radio comms.

The DBX interior is also radically different. Required to carry a minimum of three people (the driver and two doctors) as well as provide a spare seat for stranded F1 drivers, the car has had its central rear seat removed entirely, and the other four replaced with buckets and harnesses. Aston says a large medical bag, a defibrillator, two fire extinguishers and a burn kit all fit in the car's 632-litre boot space.

The development of both models was carried out by the engineering team at Aston, and are said to have racked up almost 15,000km of collective testing, including in a dyno climate chamber to ensure they will perform in all race conditions. Both cars, resplendent in an all-new paint colour – the 2021 Aston Martin Racing Green that mimics the firm's F1 livery – are set to make their motorsport debut at the three-day preseason test at Bahrain this weekend.