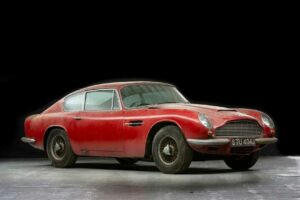 It turns out some of the coolest classic cars aren’t just hidden in barns. Take this 1970 Aston Martin DB6 Vantage that spent approximately three decades sitting in a garage and sold for approximately $258,000 at RM Sotheby’s online-only Open Roads, April auction.

Despite its somewhat ragged condition, this DB6 still retains its original engine and red-over-black exterior and interior color combination. The powerplant parked under this car’s hood is no ordinary DB6 unit, either. This DB6 is reportedly one of just 71 factory-built Vantage models, which turned up the wick on the sports car’s 4.0-liter I-6 engine, boosting power from 282 hp to 325. And that’s on top of the fact this particular DB6 is a later Mk II model, which means its five-speed gearbox benefits from a heftier clutch and its three-spoke steering wheel connects to a standard power-assist setup.

Admittedly, this tired-looking DB6 is not pretty. But remove the dirt, dust, and grime spattered about its body and interior, and this classic Aston might just be one of the most original DB6 Vantages out there. That alone arguably justifies dropping more than a quarter-million dollars to own it.

READ MORE
The Aston Martin V12 Speedster Looks Incredible With the DBR1 Package
Second in Line: This Classic Aston Martin Is the Number Two of DB4s
Buy an Aston Martin Luxury Condo, Get a Free DBX, DB11, or Vulcan