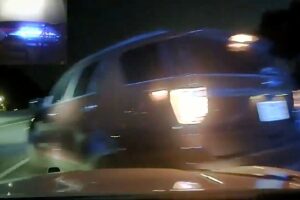 An Arkansas State Police officer won’t be punished after escalating an uneventful traffic stop with a PIT maneuver, flipping a late-model Ford Explorer SUV driven by a pregnant woman.

Fox 16 reports Nicole Harper was driving on Interstate 67 outside Jacksonville, Arkansas last July when ASP Senior Corporal Rodney Dunn reportedly detected her traveling at 84 mph in a 70 zone, according to Newsweek. Dunn activated his lights and sirens and pursued Harper, who reportedly slowed to around 60 and activated her hazard lights as she sought a safe place to stop, as Arkansas’s Driver License Study Guide instructs drivers to do to signal compliance, because that section of highway had a small shoulder. Within two minutes, however, Dunn drew alongside Harper and executed a PIT maneuver, as can be witnessed on the police cruiser’s dash cam video that’s now been released. The move immediately sent Harper’s SUV into the median and flipped it on its roof. When Dunn approached the vehicle, his body microphone recorded him asking why Harper didn’t stop, to which she reportedly replied she “didn’t feel it was safe” to use the highway’s narrow shoulder for the traffic stop. Dunn reportedly responded “well this is where you ended up,” and apparently accused Harper of fleeing rather than complying, as indicated by a statement from ASP Colonel Bill Bryant.

“Upon the immediate approach of an authorized emergency vehicle displaying the signal to stop, the driver must pull over and stop. Should a driver make the decision to ignore the law and flee from police, state troopers are trained to consider their options,” Bryant told Fox 16. “In every case, a state trooper has used a PIT maneuver, the fleeing driver could have chosen to end the pursuit by doing what all law-abiding citizens do every day when a police officer turns on the blue lights—they pull over and stop.”

Dunn reportedly faces no discipline for his actions, though Harper has reportedly filed a lawsuit against the officer, accusing him of excessive use of force and negligence.

The ASP’s use of PIT maneuvers reportedly almost doubled in 2020 to 144 attempts, causing a total of three fatalities, one of them to a mentally handicapped driver who ran a red light. This department’s record of PIT maneuver fatalities makes up an outsize portion of such deaths, which The Washington Post reported last August to have totaled 30 nationwide since 2016. As Arkansans make up less than one percent of the U.S. population, that would seem to indicate the technique’s use in Arkansas is at least 10 times likelier to result in a fatality than elsewhere based on 2020 data alone. We covered at least one extreme example before where an Arkansas state trooper initiated a PIT maneuver at over 100 mph, resulting in a crash that killed the fleeing driver.

Road fatalities as a whole may have climbed sharply in 2020, but Americans’ new recklessness on the road doesn’t explain the trend of PIT maneuver deaths in Arkansas. There’s a common thread here, and it isn’t the behavior of civilians.