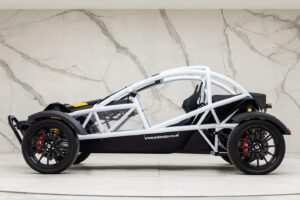 For cars that seem so similar to the untrained eye, the Ariel Atom and Nomad are very different – and very tempting – propositions. Which is probably why Ariel can’t make enough of them. The Atom is turbocharged and built for fast road or track use; the Nomad, with a naturally aspirated or supercharged 2.4, is really designed for off-road frolics. However, some weather protection and springier suspension also makes it a bit more suitable for driving longer distances than an Atom.

Then in one fell swoop the Nomad R came to represent both sides of Ariel in one limited edition model. Here was the off-road one, dropped via stiffer suspension onto lightweight wheels and track tyres. The 2.4-litre Honda engine was swapped for a 2.0-litre one – basically the Atom 3.5R powertrain, supercharged once more for the ultimate in visceral performance. A sequential gearbox as used in the really serious Atoms was also standard fit, pointing at just how focused this Nomad – once pitched as the farmyard plaything – had become.

The Nomad R was a daft idea because that’s exactly what Ariel wanted; the aim was for something “a bit bonkers”, and the car was certainly that. Here was a 340hp rally raid buggy, almost, that weighed less than 700kg and was only geared to 120mph – and featured track ready upgrades on top. ‘A bit bonkers’ probably sells the Nomad R rather short.

Ariel made just five in 2020, priced at almost £80,000, and all were sold before the car was announced. After all, nobody knows what car to offer Ariel customers quite like Ariel itself. The R doesn’t really make any sense at all, but that is exactly the point. And clearly five diehard Ariel fans thought it sounded like a great idea.

This is one of the fab five, a Nomad R that’s for sale after a couple of thousand miles unforgettable driving. It looks awfully like the car that featured in the PH video, with the same colours, wheels and Ohlins suspension. Plus this is a 2019 registered Nomad, and the R wasn’t launched until June 2020, suggesting it might be the very first one. So a little bit of Ariel history, potentially, as well as one of the wildest driving experiences out there.

It’s for sale at £100,000, which is a healthy premium over new price even accounting for the £5k suspension and £3k Road Pack. It’s fully 50 per cent more than any other Ariel in the classifieds. But then the R was always tens of thousands more than anything else in the range, and delivery mileage Atoms are for sale at significantly more than their RRP – it’s quite literally the price that must be paid to jump the Ariel queue. Add into that the incredible rarity of the R and the unrepeatable spec and it’s easy to see why six figures is being asked. Moreover, five customers eagerly snapped up the R a couple of years ago; don’t be surprised if a new member of the gang grabs this one before you can say ‘loopy’.